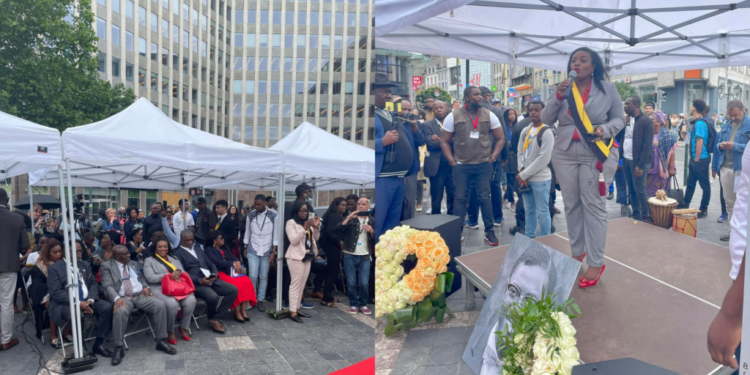 Brussels, (Brussels Morning)-  The Congolese diaspora paid tribute to their former Prime Minister Patrice Emery Lumumba on Tuesday afternoon on Lumumbaplein, which is located at the entrance of the Matonge district in Ixelles.

The remains of Patrice Emery Lumumba arrived at Lumumbaplein from the Congolese embassy in Brussels around 3 pm. Several Congolese from the neighbourhood paid tribute to the man they call ‘their national hero’ said BRUZZ.

For Lydia Mutyebele, ships of Equal Opportunities, this is the result of a long struggle that has now finally come to an end. “The family has fought, the associations in Brussels have also fought to support this return and the political world has followed suit. Working together always pays off,” she explains.

Patrice Emery Lumumba continues to inspire Mutyebele. “He is a national hero, someone who knew how to say ‘no’ in 1960 when everyone was afraid of colonial authority. I try to take his courage in what I do today.”

Dido Lakama, president of the Change asbl association in Belgium and also one of the organisers of the event, is happy and satisfied with the first step of the return. “As Bantus (A group of peoples in Central Africa, ed.), the return of the remains is important. Even spiritually, because it allows us to put the person in the ground and also let the family mourn,” explains he.

Kamba wonders if people understand who Lumumba was and what his ideology was. “Lumumba stands for many values ​​such as freedom, justice and determination. But I will say many more that he is an example of sacrifice. For the nation and humanity with justice and dignity,” he says.

He gives Congolese youth hope. “The young people have re-appropriated the story and we will continue to press and work with the Belgian and Congolese judiciary to restore dignity, justice and truth,” he concludes.

On the way to Lumumbaville

According to the official program, Lumumba’s remains will arrive in Kinshasa on Wednesday to be taken to his home village, Lumumbaville in Sankuru province. After that, other provinces are planned, such as Kisangani and Haut-Katanga, before returning to the capital Kinshasa.