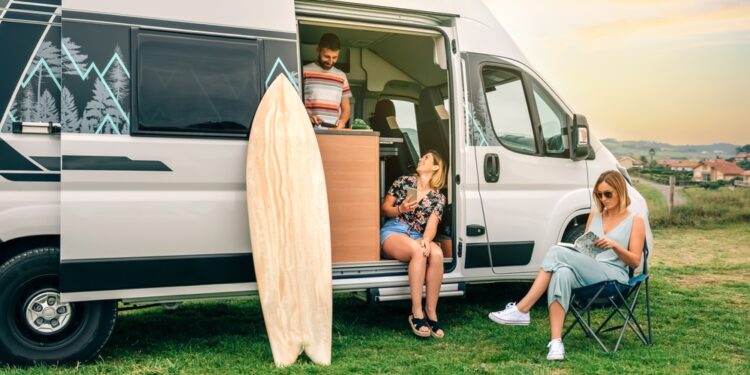 Brussels, (Brussels Morning)-  In Brussels there is currently only one place where you can go with your motorhome. “It is difficult everywhere in Belgium, but Brussels is the biggest pain point,” it sounds at the motorhome club. Although it is not much better in other European capitals. However, there is enough interest, according to a pilot project in Anderlecht.

There are currently 69,095 motorhomes registered in Belgium, according to La Libre and BRUZZ, an absolute record. While only 2,789 new vehicles were registered in 2011, there will be 5,400 in 2021. Motorhome tourism is also booming elsewhere in Europe. But anyone who comes to Brussels has to look for a place for a long time.

Around Brussels you can go to the campsite in Wezembeek-Oppem, or to a pitch in Grimbergen, Jesus-Eik or Tervuren. In the Brussels region itself you had ‘camping Bruxelles Open Sky’, on Waversesteenweg in Ixelles, but it is closed. Camping 58, which is due to open in mid-August at the foot of the Atomium, focuses only on tents.

At the moment there is only one place in Brussels where you can go with your motorhome, and that is in the parking lot of the youth hostel ‘Generation Europe’ in Molenbeek. There is room for five motorhomes. Four places are occupied on Tuesday. Among them, one motorhome from Germany, which is just reversing into its pitch.

“It’s difficult in all European cities”, says the German Beet, “in the villages it is usually a lot better. There are not many locations in the city and when there are, it is difficult to maneuver through the narrow streets .” They stay for two nights, for which they pay 30 euros per night. “That is very expensive”, she says, “although cities are usually a bit more expensive.” What they are up to in Brussels “Sightseeing.”

A search on campercontact.com shows that other capitals also have a very limited offer. In Amsterdam, for example, you already have to go to Amstelveen or Amsterdam-Noord, and even then you end up at a (usually more expensive) campsite. In the spacious area of ​​Paris there is one parking space for 20 motorhomes, and if you want to visit London with the motorhome, you have to go to Windsor. Berlin does have several motorhome pitches, although they are sometimes (very) far from the centre. Then the pitch in Molenbeek is still quite central, although the offer with five places is of course very limited.

“It is a pity that there are so few places in Brussels”, says Kris Sinnave, president of the Belgian Motorhomeclub (BMHC). “It is sad throughout Belgium, but Brussels is the biggest pain point.”

An often heard argument is that cities prefer to see their tourists stay in hotels, in order to strengthen the local economy. “But motorhome tourists also spend on average between 45 and 50 euros a day on shopping, food or fuel,” Sinnave says. “From September, we will start an action and hand out signs to place behind the windscreen.” On that sign: ‘we buy locally’. “We have therefore distributed a brochure to all municipal authorities, asking them to provide such places. You don’t even have to apply for a permit among the 9 pitches.”

The municipality of Anderlecht is already in favour of that idea. From January 2022 you can also go to the Félicien Ropsstraat. There is a site, good for 24 parking spaces. They only cost 10 euros per night, but then you have no water or electricity. Unfortunately, one of the employees is ill, and the motorhome no longer accepts new reservations in the month of August. “But we will open again in September,” says initiator Sébastien Tran.

The camper place is a test, in collaboration with the municipality of Anderlecht. “If it is a success, we will open a real ‘aire’ elsewhere in Anderlecht, with services”, says Tran. This test phase lasts four years, but the long period should above all give him the opportunity to go through the time-consuming permit procedure for a new place. Although that depends on the success of the current location.

“Whether the current project is a success? From January to June we have already had 650 motorhomes or motorhomes on the site. From next year we want to open a file with the municipality for a real motorhome parking”, says Tran.

The municipality of Anderlecht sees no flaws in this form of tourism. “It is a segment that exists, and which we also want to tap into,” said the cabinet of authorised alderman Susanne Müller-Hübsch.

There are currently no other municipal or regional initiatives for setting up a motorhome parking space. Although you can always park on the public road. However, that should not take longer than 24 hours. If you think you can fold out a camping table in the evening, it’s worth it. This small luxury is forbidden throughout the entire Brussels territory.