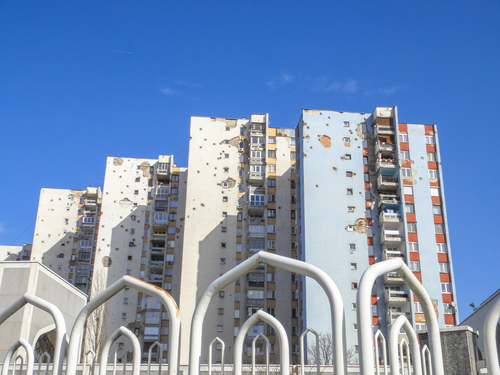 Belgium (Brussels Morning Newspaper) Images of war-torn Ukraine, families and children living in devastated apartment buildings, facing everyday shelling from a superior military force, seem chillingly familiar to the survivors of the Yugoslav wars at the end of the last century.

Capital of Bosnia and Herzegovina, Sarajevo, marked on Tuesday its sombre 30th anniversary of the beginning of the longest siege of a capital city in the history of modern warfare. “Thirty years after the siege of Sarajevo began, we have war and aggression in Europe again,” said Sarajevo’s Mayor Benjamina Karić to regional N1 broadcaster.

With the photographs from the siege period on display all over the city to mark the anniversary, Karić said the world should take notice. “These are images that go out into the world and serve as a warning. Now in 2022, more than ever, Sarajevo should be a warning to what is happening. Nobody needs a new Sarajevo,” she stressed.

Belgrade-backed Army of Republika Srpska laid siege on Sarajevo between 5 April 1992 to 29 February 1996. The city’s some 500,000 inhabitants spent 1,425 days completely surrounded by Serbian artillery, the siege lasting three times longer than the infamous Battle of Stalingrad.

Nearly 14,000 people were killed during the siege, including more than 5,400 civilians. The city’s buildings were shelled an average of 329 times per day during the siege, with a maximum recorded on 22 July 1993, when 3,777 artillery shells fell on the city.

The so-called “urbicide” devastated a city previously hailed as a melting pot of cultures, its Catholic, Orthodox, Muslim and Jewish citizens living in harmony, the city centre featuring historic temples and churches dedicated to all major religions in Europe.

Republika Srpska Army damaged nearly all of the city’s buildings, completely destroying some 35,000. The constant shelling destroyed medical complexes, media centres, industries, government buildings and the National Library, which was burned to the ground destroying the entire national archive.

As combined Bosnian and Croatian forces went on the offensive in late 1995, the Serbian military positions were gradually pushed back, returning the heating, electricity and water supplies to the city for the first time in three years.

The final act of aggression during the siege took place some three weeks later, on 9 January 1996, when a single rocket-propelled grenade hit a tram driving down the main street in Sarajevo. A 55-year old woman was killed and 19 others wounded. Perpetrators were never identified.
Bosnian Serb political leader Radovan Karadžić and military leader Ratko Mladić were both convicted of war crimes for their role in the siege of Sarajevo and the Srebrenica genocide, and sentenced to life in prison by the International Criminal Tribunal for Former Yugoslavia (ICTY). They remain to be hailed as heroes by today’s Bosnian Serb leaders such as Milorad Dodik.

Tags: Main-Slidersurvivors of the Yugoslav wars