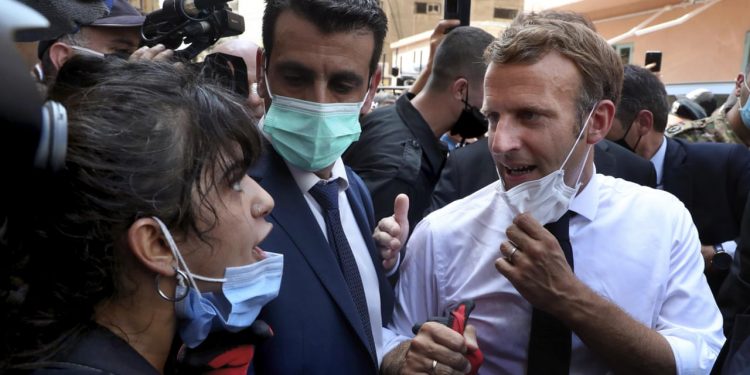 As the Lebanese army took control of the site on the first day of a two-week state of emergency, there were growing calls inside and outside the country for an independent investigation into the disaster that killed at least 157 people, left thousands homeless and caused up to $15bn (£11bn) worth of damage to the capital.

More bodies are expected to be retrieved in ongoing search and rescue operations in and around the port, where a stash of 2,750 tonnes of ammonium nitrate is thought to have ignited shortly after 6pm on Tuesday, sparking the largest explosion in Beirut’s history.

As volunteers worked to clean up damaged streets, buildings and hospitals, there was growing rage across Lebanon at how the disaster was allowed to occur.

Macron toured the wrecked Gemmayze neighbourhood near the port and was surrounded by hundreds of people calling for revolution and the downfall of the governing regime.

“I guarantee you this – aid will not go to corrupt hands,” Macron told the protesters. “I will talk to all political forces to ask them for a new pact. I am here today to propose a new political pact to them.”

Footage showed members of the crowd urging Macron to “help us” and “do something”. “I see the emotion on your face, the sadness, the pain. This is why I’m here,” he told one group.

Few Lebanese leaders have ventured out to see the site or tour affected neighbourhoods since the blast and a convoy carrying the former prime minister Saad Hariri was attacked on Tuesday as he drove through downtown Beirut.

Lebanese officials have started blaming each other for leaving the highly explosive substance sitting so close to residential neighbourhoods for six years. The ammonium nitrate was taken from a ship that docked in Beirut in 2013 and was apparently abandoned by its Russian owner and mostly Ukrainian crew.

Badri Daher, the director general of Lebanese customs, said on Wednesday that his office had sent six letters to the country’s judiciary urging them to deal with the chemicals either by exporting the load, reselling it or giving it to the army.

An unspecified number of port officials have been ordered to be placed under house arrest pending the investigation, which is scheduled to take four more days. It will report to the national cabinet, which will refer its findings to the judiciary.

Amnesty International was among the organisations calling for an independent investigation into the circumstances leading up to the explosion.

Petitions circulating online calling for an international inquiry received thousands of signatures. A leading Druze politician, Walid Jumblatt, said he had no faith in the government’s ability to find and reveal the truth.

“We have no trust at all in this ruling gang,” said Jumblatt, whose party has lawmakers in parliament but is not in the cabinet, which took office in January with backing from the Hezbollah movement and its allies.

Lebanon’s ambassador to Jordan announced her resignation on Thursday, saying “total negligence” by the country’s authorities signalled the need for a leadership change.

In a televised statement aired by Lebanese broadcaster MTV, Ambassador Tracy Chamoun said she could “no longer tolerate” the government’s ineptitude.

“I am announcing my resignation as an ambassador… in protest against state negligence, theft and lying,” said Chamoun, who was appointed to her post in 2017 with the endorsement of President Michel Aoun.

“This disaster rang a bell: we should not show any of them mercy and they all must go,” she added. “This is total negligence.”

Residents of the capital are seething at a disaster that appears to have been foreseeable and frequently warned about.

Macron said his visit was “an opportunity to have a frank and challenging dialogue with the Lebanese political powers and institutions”. He said France would work to coordinate international aid, but warned that “if reforms are not made, Lebanon will continue to sink”.

In a frank press conference at the end of the day, the French leader joined calls for an “open and transparent” international inquiry.

He said he had noted the expressions of rage and disgust he had heard. “I can’t initiate a revolution, it is up to the Lebanese people,” he said. “I will support the people but I will not interfere in Lebanese politics.”

France was helping to organise an international conference to spur and coordinate funding to provide the Lebanese with food, medicine and housing, he added.

On one shattered balcony, someone had put up a thin noose along with a sign reading “Whose heads will be hung?” The hashtag “Hang up the nooses” was trending on Lebanese social media.

Last year there was a civil uprising against Lebanon’s political system, which divides power and its spoils among 18 recognised sectarian groups in a form that has kept the peace since the country’s civil war but which critics say encourages corruption and entrenches a few ruling dynasties.

The protests managed to unseat Hariri as prime minister but did little to change the underlying political structure. Since then the country’s economy has collapsed, leaving half the Lebanese population in poverty and the savings of most wiped out by a free-falling currency.

The explosion on Tuesday echoed another blast 15 years ago in which the former prime minister Rafik Hariri was killed by a car bomb not far from the port.

An international court trying four men accused of Hariri’s assassination and of killing 21 others with him was supposed to give its long-awaited verdict on Friday.

But the court outside The Hague said it was delaying the announcement “out of respect for the countless victims of the devastating explosion that shook Beirut on 4 August”.