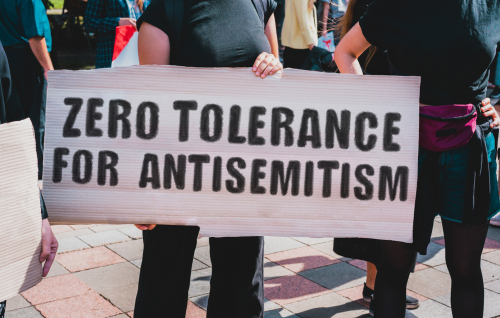 The phrase " Zero tolerance for antisemitism " drawn on a carton banner in hand. A girl holds a cardboard with an inscription. Girls on the street. Protest, march. Rally.

Belgium, (Brussels Morning Newspaper) Antisemitism is fundamentally incompatible with Europe’s core values it is the statement of the greek MEP Anna-Michelle Assimakopoulou that was given to the media in line with the process of building the EU Strategy on combating anti-Semitism.
The new strategy covers education as there is nothing more dangerous to the future than the poisoning of children’s minds.

MEP Asimakopoulou highlighted that despite the education inclusion in the EU strategy, the Commission refuses to condition funding to the Palestinian Authority when the textbooks used in its schools contain antisemitic rhetoric and incitement to violence and hatred.

She believes that the zero-tolerance stance of the Commission should apply to the textbooks and advocate putting conditionality on the funding as it would incentivize removing the antisemitic textbooks from circulation.