Afghan interpreters call on NATO to rescue them from Taliban 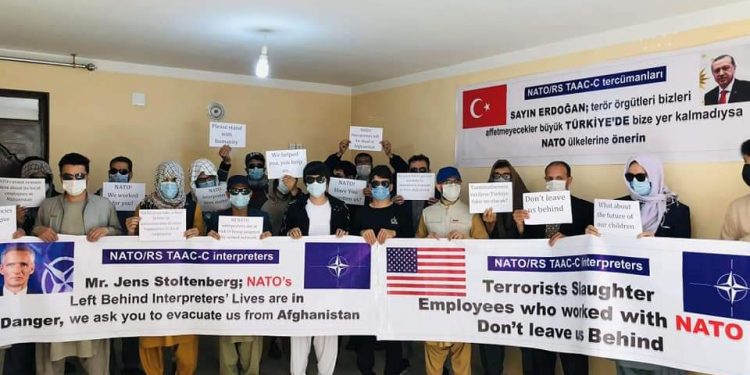 Brussels (Brussels Morning) More than 70 Afghan nationals who worked for NATO forces as interpreters were left behind during the evacuation efforts, and have been living in hiding in Afghanistan ever since, fearful for their lives.

According to Ahmadi, one of the interpreters currently hiding in the capital Kabul, up to 80 Afghans who were assigned as interpreters to Turkish NATO forces were promised in July that they would be evacuated alongside other NATO interpreters and other local staff.

However, as the evacuation programme started, the Turkish embassy and Turkish NATO officials reportedly changed their official position, telling them they had no plan in place to evacuate their interpreters.

“Currently, we live under high risk, we are all hidden from insurgent Taliban, we can’t even go to our homes”, Ahmadi told us. “None of us are safe, even our family members are at risk,” he added.

Ahmadi said that most members of the group are currently in hiding, and are afraid of moving around Kabul and other cities, as they believe they would be killed if identified as NATO collaborators by the Taliban.

Around 20 of the interpreters managed to gather a couple of days ago in a secret location and took pictures holding banners in English and Turkish calling on NATO to evacuate them from Afghanistan.

“Terrorists slaughter employees who worked with NATO – Don’t leave us behind”, one banner proclaimed. Another, directed at NATO Secretary-General Jens Stoltenberg, said “Left behind interpreters’ lives are in danger, we ask you to evacuate us from Afghanistan.”

A banner in Turkish addressed the country’s President, Recep Tayyip Erdoğan. “Mister Erdoğan, terrorist organisations won’t forgive us”, it stated baldly, urging him to send them to other NATO countries if there’s no place for them in “great Turkey”.

Global rights watchdog Amnesty International published an advocacy briefing last week, emphasising how most routes out of Afghanistan are now closed to those fearing reprisal from the Taliban and other armed groups. Turkish authorities have announced plans to extend their wall on the border with Iran, and continue to round up undocumented Afghans in preparation for deportation.