Why Islamophobia in Europe needs to be abolished

by Hande Taner
in Opinion 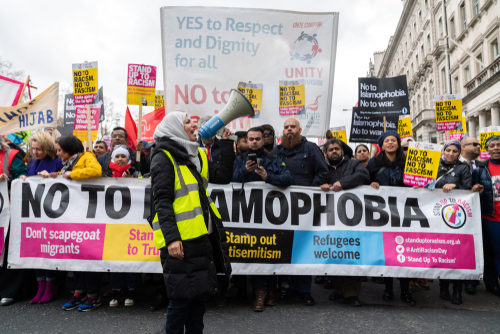 Belgium, (Brussels Morning Newspaper) Today marks the European Day Against Islamophobia. As we commemorate this day I ask a simple question to those that lead the institutions that are supposed to represent us all, are they content in their work (or lack thereof) to tackle this evil across our Europe?

Islamophobia is often defined as “Acts of violence and discrimination, as well as racist speech, fueled by historical abuses and negative stereotyping which leads to exclusion and dehumanization of Muslims, and all those perceived as such. Islamophobia has nothing to do with criticism of Islam”.

Survey data released by the EU Agency for Fundamental Rights (FRA) in June 2020 showed that 22% of the general population in the EU would not feel comfortable with having a Muslim as a neighbor; 31% would not feel comfortable with a member of their family marrying a Muslim; and, that 21% feel that it would be acceptable not to hire a Muslim woman because she wears an Islamic headscarf.

Throughout the lifespan of the young people I represent, Islam and Muslims have been demonized and misrepresented on a daily basis. The data above indicates the consequences. This specific form of racism will not be tackled unless those in positions of leadership take it

seriously – at current it is not seen as a priority.

As the President of FEMYSO which acts as the voice of Muslim youth in Europe, representing 33 Muslim youth organizations in 21 European countries, I will of course advocate for the cause that I’m elected to represent. However, when it comes to Islamophobia it is not about critiquing the work done, it is the amazement at the fact that almost nothing is being done.

You may assume I’m being somewhat dramatic, however, I’m not – and this is why. It may shock some to hear that the role of anti-Muslim hatred coordinator in the European Commission has remained vacant since July 2021. But this lack of representation at the highest levels is merely just another example.

We also saw the EU and France provide opposition to the creation of an International Day to Combat Islamophobia at the UN in March. As a politics graduate, I understand the intricacies of realpolitik within diplomacy better than most – but how can one justify such a decision? How am I supposed to advise my Member Organizations to engage with the European institutions which represent them, when they refuse to support activities acknowledging their oppression? I can ask this question as I also personally led the European Elections campaign for my organization back in 2019, having successfully encouraged hundreds of Muslim youth to vote.

As an organization devoted to uplifting the voices of Muslim youth, we have had almost systemic defamation campaigns with periodic intervals, carefully paying attention to news cycles. Every institution or leader seeking to engage with us as a representative organization is criticized and forced to disengage. Whilst some European leaders have made it clear they will not be bullied out of engaging with Muslim youth, others haven’t.

The latest attempt by the French government to label and call upon the European Commission to completely disengage must be seen for what it is: blatant islamophobia. And this is to boost their right-wing credentials for electoral gain.

This behavior by the French government is not new: in November 2021 they used the weight of their high offices not to tackle racism, but to force the removal of a human right campaign calling for Muslim women to be able to wear the hijab or not. Whilst this was not our campaign, instead of critiquing their own institutions, they chose to propagate conspiracy theories.

The impact of Islamophobic defamation

What must not be forgotten, is the impact of this institutional Islamophobia: it leads to racialized abuse, to threats of violence, and lost employment opportunities. These are not hypothetical claims, these are the real-world impacts that my volunteers and Muslim activists across Europe have had to deal with throughout and following their activism journeys. This leads to the complete deterioration of mental and physical health as a result of stress, fear, and eventually complete disengagement.

It is worth noting that these attacks are a common means of seeking to undermine the work of many Muslim citizens and civil organizations that are working to make a positive contribution to their European societies and counter Islamophobia.

The silencing and coordinated exclusion of Muslim youth from youth policies and democratic processes may suit the agenda of certain actors, but it makes European civil society poorer, leaves youth policy incomplete, and makes our institutions fundamentally unrepresentative, all the while contributing to the active shrinking of our civic space.

The time is now for institutional, political, and civil society leaders on European and national levels to take this issue seriously. There is simply no other option. The time for appeasing those who scapegoat Muslims and excusing their language of hate as freedom of speech must come to an end. European values of human dignity, fundamental rights, and equality must be demonstrated through action on this topic.

As Muslim youth, we make up a large part of the unique fabric of Europe, where we were taught that every strand is as important as the other. We intend to go nowhere, and we will continue to bring positive change to our societies and advocate for our rights for all, as we work day and night towards our vision: a diverse, cohesive and vibrant Europe for all