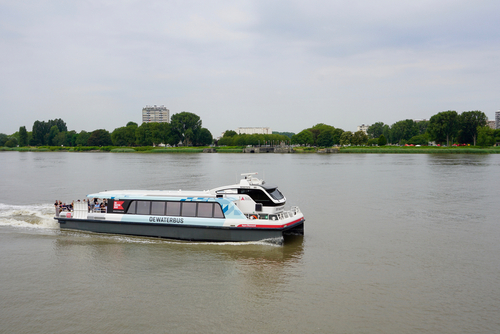 Brussels (BrusselsMorning) The well-known canal shuttle made more space on the boat for travelers by bicycle, and that effort pays off, as it turns out. The Waterbus transported 50% more cyclists during the past two pandemic years. “Bicycle dealers were unable to meet the demand and you could see that with us,” says director Guido Moens. The total number of travelers is still lower than before the pandemic.

The combination of sailing and cycling is an asset for the Waterbus, because there is more room for cyclists on the boat than on a tram or train. Waterbus has also consciously invested in this. Many seats made way for bicycle racks. People with a pram or wheelchair also made use of the additional places. Seats are still available on the upper deck and part of the lower deck.

In terms of visitor numbers, the Waterbus has not yet recovered from the consequences of the pandemic. The Waterbus received more travelers in 2021 than in 2020, when they recorded only 50 to 55 percent of the traffic in 2019. But in 2021, according to initial estimates, the number of users will reach 60 percent of passengers registered in 2019. This is what La Capitale writes and Moens confirms to BRUZZ

The final figures are not yet in, warns Moens. But it is clear that the Waterbus has also suffered from the corona pandemic in the past year. The bad weather during the summer months also played a part.

Initially, the Waterbus wanted to gradually evolve into a multi-boat fleet by 2022. But right now it’s more important to stay afloat, the company says. “We may consider testing the rides earlier in the morning (before 9am) and later in the evening (after 6pm) around September or October, if health conditions permit. In this way, the Waterbus can attract a public that goes to work. But with so much teleworking, it is not worth the effort today.

In the past year, in addition to commuters, the Waterbus also attracted families, cyclists and groups or schools who made use of the boat to, for example, go to Park Drie Fonteinen. The Waterbus was created in 2013 at the initiative of the Brussels By Water and Brabant Canal Tours associations and connects Vilvoorde with Brussels.