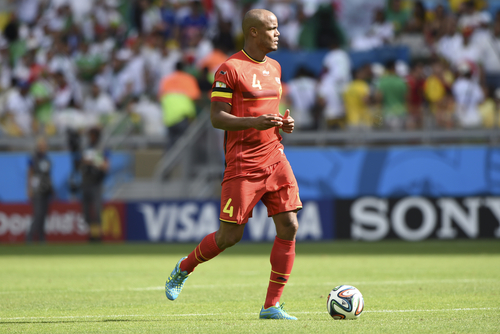 BELO HORIZONTE, BRAZIL - June 17, 2014: Vincent KOMPANY of Belgium compete for the ball during the World Cup Group H game between Belgium and Algeria at Mineirao Stadium.

Brussels (Brussels Morning) After the split between Club Brugge and Anderlecht on Sunday, Vincent Kompany confirmed at the microphone of Eleven Sports that he had been the victim of racist insults from Bruges supporters as well as his staff and players.

“I came home disgusted and disappointed. My players, my staff and I were victims of racist insults. They notably shouted ‘black monkey’. There are a lot of people here who have given a lot for this country and they come just to play football. And I don’t want to get into a conflict with Club Brugge either”, Kompany told Eleven Sports.

“I don’t want to comment on the game. I just want to get together with my staff, to stay with the people who matter to me. We shouldn’t be going through that anymore”, added the Anderlecht coach before leaving the interview.

In a press conference after the match, Philippe Clement, the Bruges coach, assured that he had not heard racist insults. “If anyone has been shouting such things, it is clearly not the values ​​that Club Brugge stands for”, he said.

In the process, Club Brugge wrote on Twitter that it condemned any form of racism. “These few people are not representative of the values ​​and standards of our club and have no place at the Jan Breydel stadium”.

Increasing cases of football racism being reported in Belgium

This case has come to light at a time when there are multiple cases of racism in football being reported in Belgium and across the rest of Europe.

Right before the beginning of the Covid-19 pandemic, another Belgian club, KV Mechelen, had opened an investigation into the derogatory racial slurs thrown against Charleroi midfielder Marco Ilaimaharitra, which reportedly left him in tears while he was still on the field.

When Ilaimaharitra first reported the case to the referee, he was reportedly ignored. He then reacted against the racist fan, upon which he was shown a yellow card. This made Ilaimaharitra quit the field altogether, resulting in chaos during the match.