Ukrainians in transit center Ariane are near despair: ‘I have been fooled’ 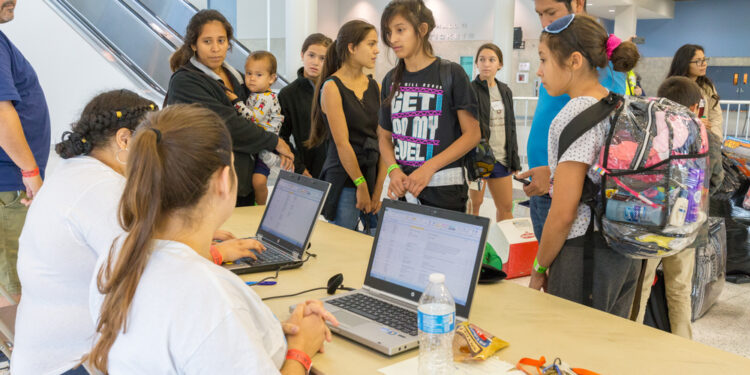 Brussels, (Brussels Morning)-  For a large part of the 700 residents of the Ariane centre in Woluwe-Saint-Lambert, their emergency shelter is gradually taking on the allure of agony. Some have been sleeping there for months with no prospect of temporary shelter and the social benefits that come with it. “I do not understand anything about it.”

While a mother and her hopping child race on Arianelaan towards a white taxi to set course for a host family, the drumming is on at the reception of the Ariane centre.

More than six months after the start of the war in Ukraine, refugees are still trickling into the former office buildings. Meanwhile, people who have been staying in Arianelaan for some time ask Red Cross employees about the status of their accommodation application.

In recent months, the transit centre has been transformed into a reception centre, although it is not actually designed for this. Due to the shrinking supply of suitable reception places, refugees from Ukraine do not have to spend two or three, but sometimes sixty or even ninety nights in the cramped rooms of the centre before they can be sent on to temporary shelter with a host family or in one of the municipal or regional authorities. housing initiatives.

But Fedasil, which is responsible for matching host families and refugees, only has a limited number of places. “We check whether the places that the regions and the municipalities pass on correspond to the needs,” said spokeswoman Lies Gilis to a BRUZZ reporter. But while the number of reception places in Belgium is shrinking, the occupation in the centre remains high. The number of residents is currently about 700. In August the centre had 600 registrations compared to 700 people who checked out.

Anzori (57) and his son Luka (16) are not among those lucky ones. They now know Ariane’s corridors like the back of their hands. The former Ukrainian police officer lived in Ukraine and Georgia – he fled the Armenian genocide in the 1990s – but lived during Russia’s invasion of Crimea, the peninsula he exchanged for Kiev after the first attacks at the end of February. From there he moved to our country in April.

“I was able to find accommodation here fairly quickly, in Bruges. That was a relief, but I wanted to bring my son here too. Fortunately, I was guaranteed that it was possible to go get it, as long as I was back within the month. That worked.”

When Anzori is back in Bruges after a long journey, with Luka by his side, it turns out that it is no longer possible to live in his temporary accommodation. “I’ve been fooled,” he says. “There was nothing for it but to return to Ariane.” Father and son have been trapped there for about three months.

Meanwhile, the two do not give up hope. Anzori hopes to build a football career here for his son, a promising attacker. That seems to be working well: in a search for a football team, the proud father came into contact with someone who has good connections at Club Brugge.

Meanwhile, Luka was able to start in one of the youth teams of the national champion. It is not possible to train on weekdays, but the teenager, who had posters of Cristiano Ronaldo in his room, goes to Bruges for matches.

“I try to train as much as possible, just with my ball on the street or on nearby football fields. But life here is not good,” says Luka. “The food is disappointing, the internet connection often goes down, …- this is just a bad situation for everyone. I would have thought that Belgium – the heart of the European Union – would offer more opportunities. My father wants to settle down here eventually, he wants to bring my sister, brother and mother here too, but I’m not sure yet.”

Anzori’s determination is telling, precisely because his path in Belgium is anything but roses. “Recently I was on a train between Bruges and Brussels, but I no longer had the money for a train ticket. The conductor didn’t believe it. “You’ve been here for three months, you must already have some money?” I was fined 140 euros, while as a diabetic I need money to pay for my medication.”

Also for the 63-year-old Avtandil, his stay in Belgium does not go as hoped. He has been sleeping, eating and showering in Ariane for almost three months now. There’s not much else to do, he says. “ Sit and wait .”

The Ukrainian from Kharkov was a prisoner of war for a month and a half after the Russian invasion. “We were eight people in a small cellar where the temperature was twenty degrees below zero.”

The ex-taxi driver already went to the municipality of Woluwe-Saint-Lambert in his search for a residence card A. There he ran into a njet, precisely because Avtandil does not yet have a temporary address.

“I don’t understand it, because single men who arrived here after me have already found shelter or even a job. In the meantime, they have been telling me for weeks that they are working on my file, but nothing happens.”

While the grind seems to be endless for many residents, there are also those who take matters into their own hands. For example, resident Alena organises Dutch lessons, although Ukrainian is not fluent in our language. The result: children’s Google Translate lessons.

But not everyone knows how to kill time effectively. 60-year-old Samvel and his 53-year-old wife Narine also see no light at the end of the tunnel for the time being. They have been living in Woluwe-Saint-Lambert since mid-June.

“I’ve been blind for fifteen years,” says Samvel. “I need medical check-ups and when I went looking for housing myself out of desperation, I had to have a job and be able to put a deposit on the table. That is not possible.”

Meanwhile, winter is approaching and the refugees are hoping for a speedy recovery. “We need money to buy clothes. In the morning I crave fresh air, but I left Ukraine light-packed and I quickly got cold during walks outside. Fortunately, I no longer smoke, because the men who do this have to share one cigarette with the three of them.”

The Belgian Red Cross-Flanders, which with about 80 employees is responsible for the ins and outs in Ariane, is investigating avenues for financial support for residents. In the meantime, Flanders has also indicated that it wants to expand the emergency villages in Antwerp and Mechelen, according to Olivier Van Raemdonck, spokesperson for Flemish Prime Minister Jan Jambon (N-VA).