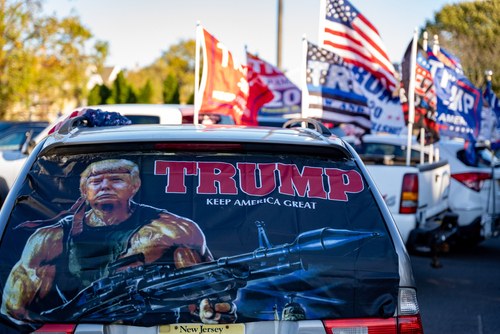 New York (Brussels Morning) During Donald Trump’s presidency, many Americans took solace in believing it was an aberration. After all, the real estate heir turned reality television star turned leader of a cult-like, racist and anti-democratic movement, who flaunted his ignorance, seemed incapable of connected thought and whose gluttony and greed was so extreme it seemed like something out of a fairy tale, was without precedence in American history. This led many of us to look forward to the end of Trump’s presidency and do whatever we could to accelerate and ensure that event.

It has now been six months since Donald Trump left the White House. Although I join many of my fellow Americans in being happy and relieved that the executive branch of the government is no longer led by a kleptocratic aspiring authoritarian, it is also apparent that Trumpism did not end on January 20th of this year. Rather, Trump’s bigotry, contempt for democracy and disconnect from reality has taken over the Republican Party.

It turns out that truly ridding the country of the dangers Donald Trump represented, and the damage he caused, is going to be a much longer and difficult project.

The most commonly cited reason for this is that Republican politicians fear Trump and the damage he could still do to their careers. Although it is true that the leadership of the Republican party appears to continue to be afraid of Donald Trump, the relationship between Trump and the GOP is more complex, and more nefarious, than that. There have been many opportunities for the leadership of the Republican Party, before during and after his presidency, to break with Donald Trump.

They had two opportunities to impeach him while he was president. There were also countless times when the Republican Party’s congressional delegation could have spoken out against Trump’s relationship with the Kremlin, cosy dealings with white supremacist organisations or murderous failure with regards to the Coronavirus pandemic. Instead, they consistently, with extremely few exceptions, tied themselves more closely to the former president and therefore his bigotry, criminality and alternative reality.

Since Trump left office, it has been much easier for the Republican Party to break with him, instead they have become even more loyal and sycophantic to the defeated, and in the eyes of many, disgraced, former president. It should be stressed that there is no political logic in continuing to tie the party to somebody who ran for president twice, lost the popular vote both times and lost the Electoral College once. However, this is the course the GOP has taken.

There is no issue that demonstrates this more clearly than how it has now become a central tenet of the Republican Party that Joe Biden stole the 2020 election. There is not a shred of evidence to support this lie, but Trump believes it and the rest of the GOP has chosen to follow suit.

Understanding this stance and the recent history of GOP fealty to Trump as simply being about fear is not a satisfactory approach. There have been too many times, including right now, when the fear factor is not as substantial as the pundits suggest – too many senators and governors who are not up for re-election for a few years, too many opportunities to push the former president to the sidelines at no real political cost and too many chances to present a different Republican vision.

A simpler, more reasonable, but probably more concerning, explanation would be that the Republican Party stands with Trump’s lies, racism and lack of concern for the American people because they believe it too. Moreover, whether they truly believe this or are doing it for political reasons becomes less important with every passing day. If you perform ignorance, cult-membership, dishonesty and racism for half a decade, you become ignorant, part of a cult, dishonest and racist – and that is the plight of the Republican Party six months into the Biden presidency.

Trump is no longer in the White House which means, mercifully, we all pay less attention to the ham-fisted goniff and his comically criminal family. However, this has given the GOP, particularly in states that are controlled by the Republican Party, the ability to spend less time on the distraction that was, and is, Trump himself and more time limiting access to the franchise, blocking efforts to vaccinate Americans against the Coronavirus, warn against the dangers of teaching young people basic truths about American history, pass laws regulating women’s bodies that would impress the fictional theocrats of Gilead and otherwise pursue an authoritarian agenda that Trump himself could never do as he floated from one scandal and humiliation to the next.

Defeating the Trumpist movement will be much more difficult than winning one election against an unpopular president, even as he sought to deny the outcome and find a way to remain in office. Trumpism has now taken over the Republican Party. Few prominent Republicans even feign disapproval of the former president; and we have seen what the GOP does to those who do. Moreover, Republican majorities are strong in many states and bolstered by a toxic combination of gerrymandering and voter suppression.

Electing Joe Biden was an essential, save-the-country moment, but six months into Biden’s presidency, it is now very clear we are in for a much longer and more difficult fight – and the stakes are as high as they ever were when Trump was in the White House.