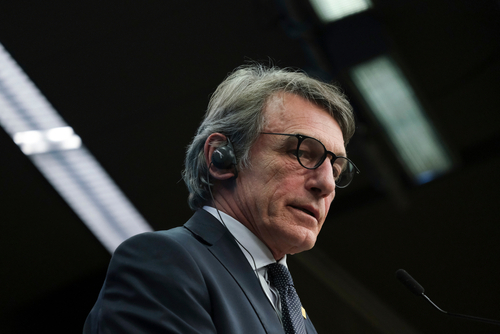 Brussels (Brussels Morning) David Sassoli leaves a great void in our lives because of what he gave us humanely. There was the smile he never let us lack, the humility he always showed and the depth that distinguished him as a person. He leaves a void because we have lost an able and competent man who worked with self-denial and farsightedness, a great pro-European leader who changed Europe. This is his great legacy and, for this reason, it has been an honour to work alongside him.

In his last speech he said: “Europe must be loyal to its citizens. A Europe that protects and a Europe that is a beacon”. These are words that encapsulate his greatness of vision and soul, his depth as a man and as a politician.

David worked with the utmost dedication even in the last months despite being tormented by health problems. And the real example he set was in his persistent and strong belief in the institutions he represented while never making any kind of difficulty evident, but, on the contrary, always working with a smile and an optimistic outlook. I had the honour and pleasure of sharing eight intense and wonderful years with him in Brussels, but of special note were our four years together in the Bureau, first as fellow vice-presidents and then working alongside him during his presidency, which was shattered by the pandemic tragedy.

We shared many initiatives and efforts to make the European Parliament increasingly transparent and sustainable, as well as open and participatory with regard to citizens’ requests. We have striven for an increasingly social and inclusive Europe, one that puts rights at the centre, and always with a convergent vision. We agreed on the need to work on deep reforms and to chart a great season of strengthening European integration. I will miss our long talks on the future of Europe — a Europe we imagined as a large open space, with participation and solidarity. It leaves a very painful void.

I would like to emphasise the style with which David conducted his politics, his great sense of institutions, his ability to keep a smile on his face and always to act in accordance with his principles, and, above all, his openness towards everyone. He was a great gentleman and a great lover of politics, so in paying him due to tribute we must be very careful not to lose his legacy. We will have to continue along the path that he had laid out already. Examples come to minds such as the major rethink of the way Parliament works, which was based on the many recommendations and suggestions that came from our working and reflection groups. These, the groups that he had launched, were attended by a great many MEPs.

As for the path towards reform of the Union, he was one of the most ardent supporters and advocates of the Conference on the Future of Europe, fervently hoping that it would not remain a mere exercise but that it would produce a series of concrete proposals for European integration. I believe this to be the great responsibility and legacy he leaves us in the wake not just of his political life in recent years but throughout his entire life.

I can’t help but think back to our last phone call, just two days before he left us. Remembering it still shocks me. I could never have imagined that the situation would have evolved in such a serious way, sensing, indeed knowing, his positivity and his desire to continue. From our conversation, I could not guess that he was experiencing such difficulties, as I now recall the words which, with his hallmark political lucidity and sense of duty and institutions, he shared with me in exchanging thoughts and reflections on the near future.