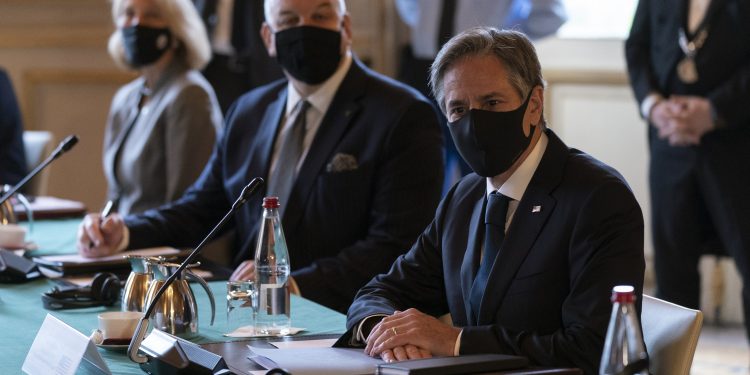 Brussels (Brussels Morning) France’s President Emmanuel Macron met with US State Secretary Antony Blinken in Paris on Tuesday, as the top US diplomat attempted to repair Washington’s relations after the row over the trilateral AUKUS military pact, which saw Australia abandon a French submarine production contract in favour of one with the US and UK.

Blinken’s Tuesday visit followed last week’s phone conversation between Macron and his US counterpart President Joe Biden, when Macron pledged to return the French ambassador to the US, having withdrawn his envoy from Washington as a protest in the initial aftermath of the  announcement of the AUKUS pact.

Macron and Blinken reportedly met face-to-face for a 40-minute talk, with a State Department official informing the press afterwards that the two sides “have an opportunity now to deepen and strengthen the cooperation”, while admitting that “a lot of hard work remains to be done”.

France’s Foreign Minister, Jean-Yves Le Drian, previously described the Australia-UK-US pact as a “stab in the back” and an act of  betrayal by the country’s closest allies. As part of the pact, Australia decided to scrap its 50 billion dollar contract with the French Naval Group shipyard for construction of a fleet of 12 conventional, diesel-electric submarines.

Canberra will instead procure a fleet of eight nuclear-powered submarines from the US and UK for an undisclosed amount, even though the main problems with the French deal stemmed from the fact that Australia insisted that France should redesign its nuclear-power submarines in order to offer the Australian navy a diesel-power variant.

France initially took umbrage on hearing of the new pact because it had neither been informed nor consulted that it was in the works. Just weeks before the new pact was announced, top Australian officials had assured the French that their submarine production contract was proceeding as planned.

Clauses in the procurement contract between Paris and Canberra reportedly called on the two sides to hold consultations and discuss any changes in the political or military environment which might threaten the contract. According to the French side, Australia never hinted at the possibility that the contract could be scrapped right up until the final decision was reached.