The security situation in Afghanistan remains very difficult and challenging 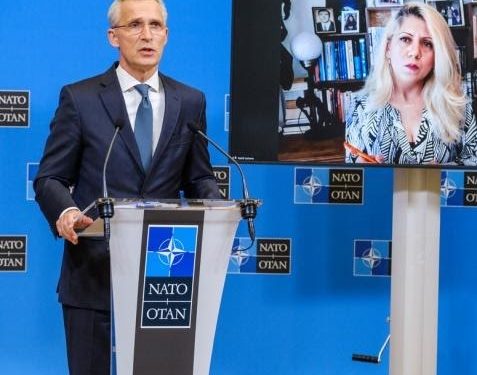 “We will continue to provide support but no longer through a military presence in Afghanistan.” Said Jens Stoltenberg NATO Secretary General in the online press conference in Brussels on Tuesday, June 1.

Brussels (Brussels Morning) In two weeks, on June 14, the leaders of NATO’s 30 member states will meet here in Brussels, which will be US President Biden’s first Summit in Brussels.

The agenda for NATO member states is long, but perhaps most pressing is their future engagement in Afghanistan, as well as developments in Ukraine and Belarus. NATO 2030 initiative, the evolution of the Alliance’s Strategic Concept, the state of the transatlantic partnership and the geopolitical implications of climate change will also be on the table.

Brussels Morning asked NATO Secretary General, Jens Stoltenberg, to assess the possibility of an attack by Al Qaida over the next 18 months and whether the troops withdrawal is timely.

Furthermore, the Secretary General was asked to comment on reports that the US is considering the construction of a base in either Pakistan or Tajikistan and whether NATO troops would also be stationed there.

“Of course, the decision to withdraw our troops entails risks, but also to stay, we’d have implemented risks for our Alliance with more fighting, potentially more casualties, and even the need to maybe increase the number of troops. So therefore, we made the decision to end our mission within weeks. I think we have to understand that the intention was never to stay in Afghanistan forever”.

Secretary Stoltenberg described the phasing out of troop engagement on the ground, going from more than 100,000 troops, not so many years ago, to around 10,000 troops at the beginning of this year and, now, a complete withdrawal.

“But as we end our military mission,” he noted,” we are stepping up our support to Afghanistan in other ways.”

NATO Secretary General said”: let me add that perhaps one of the most important things we have done in Afghanistan over the last years – as we gradually have reduced our own presence – is to train, support, help, to build professional committed Afghan Security Forces. And they are now in charge; they are now responsible for the security in their own country now and in the future. And I’m impressed by the strength and the courage of the Afghan security forces and knowing that there are risks, challenges, but also that’s exactly why we will continue to provide support to them.”

Regarding US bases in the region, Secretary Stoltenberg noted that he could not comment on US engagement in the region, but reiterated that NATO is looking to provide some out-of-country training for Afghan security forces as NATO withdraws from Afghanistan.

“There is no doubt that Afghanistan faces serious challenges. That is not an easy way forward, at the same time, but I strongly believe that the Afghans had to take full responsibility for their own future. The only way to lasting peace in Afghanistan, is for an Afghan-owned and Afghan-led peace process. So I’m not under-estimating the challenges. We have been there for twenty years and “we will continue to provide support but no longer through a military presence in Afghanistan.”

The United States and its NATO allies have been present in Afghanistan after the September 11 attacks in New York City, the first and only time Article V of the North Atlantic Treaty on Collective defense was evoked. US President Joe Biden last month pushed back the May 1st pullout until 11 September this year, that is, the 20th anniversary of the 9/11 attacks, citing the security concerns.