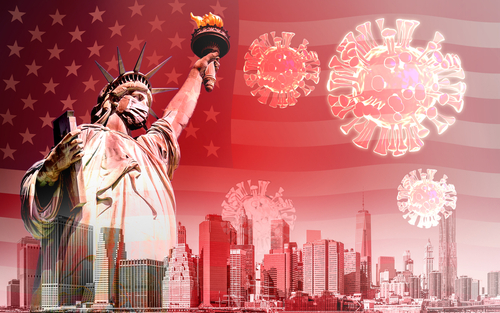 New York ( Brussels Morning) Since early 2020, the Republican Party’s position on COVID has been ill-informed, counter-productive and substantially disconnected from reality. The days when Donald Trump promised the disease would go away “like a miracle” or when, a few weeks into the shutdown, Trump and GOP officials and pundits rabbited on about not making the cure worse than the disease seem like a distant memory now. They also seem rather quaint compared to what followed in the following months.

By summer of 2020, the GOP has settled into a vociferous, aggressive and sometimes violent anti-masking and anti-shutdown position. This contributed to the spread of the disease and to tens of thousands of American deaths that summer. During that period, then President Donald Trump continued his COVID policy grounded in denial, ignorance and snake oil solutions rather than science and basic medical interventions.

As the country sank deeper into the death and disease wrought by the pandemic, Donald Trump offered little of any value other than the promise that the vaccine was on its way. In the Fall of 2020, that seemed like another case of Trump’s wishful thinking. His complete inability to present a cohesive plan for getting the vaccine, once developed, to the American people did not inspire confidence either. However, the vaccine was not far off and in the waning days of the Trump presidency, Americans began to get vaccinated.

It was during the first few months of Joe Biden’s presidency that vaccines became widely available as tens of millions of Americans rushed to get vaccinated and return to a more active and normal life. Because this occurred while a Democrat was in the White House, and because that Democrat sought to both encourage vaccinations and make them widely available, the GOP began to embrace, and eventually become defined by the anti-vaccination movement.

A quick review – although Donald Trump, the GOP cult leader, had been a vaccine advocate, Trump and the GOP embraced the anti-vaccination movement because Joe Biden succeeded in getting millions of Americans vaccinated.

In recent weeks, the Republican Party has taken an even stranger, darker and more murderous approach to COVID. While their previous policies led directly to the deaths of Americans because they simply ignored the danger of Covid and resisted medical interventions from masks to social distancing to vaccines, current GOP policy essentially mandates that people directly or indirectly expose themselves to the virus and seeks to punish those who would like to prevent that.

This is most evident at the state and local level where Republican governors and state legislatures have not only refused to consider mask mandates or requiring vaccinations, but have sought to prevent local governments, school boards and even private companies from doing that. Texas and Florida are the two biggest states with Republican governors and their governors, Greg Abbott and Ron DeSantis, seem locked in a battle to see who can most effectively accelerate the spread of COVID in their state.

Abbott and DeSantis, as well as numerous other Republican governors and other GOP-led state and local authorities are actively pursuing policies designed to spread COVID and kill more people. By, for example, banning school districts from requiring masks, and in some cases not requiring contact tracing after a student has tested positive for the virus, the Republican policy is evolving from murder by negligence to a more active approach.

This is an extraordinary and dramatic assertion, but there is no other explanation for the actions of Republican governors and GOP controlled legislatures and school boards in much of the country. The evidence for this is not just that the US is back to 500-600 COVID deaths a day, but that these deaths are concentrated in GOP-controlled areas.

A troubling number of Republican voters and activists encourage these policies and share the COVID fetish even as the death toll goes up and hits Republican areas and unvaccinated Republican loyalists the hardest. For Republican politicians, the COVID fetish has become some kind of twisted badge of honour – a way to loudly proclaim fealty to the cults of Trump and of ignorance that are now the twin pillars of the GOP.