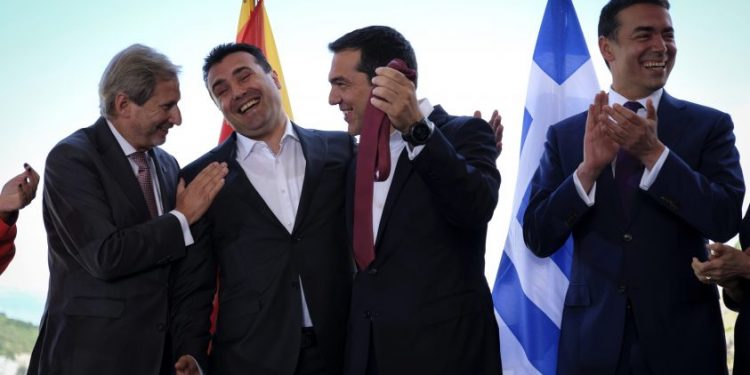 Belgrade (Brussels Morning). For over 20 years, Athens and Skopje negotiated over nation-branding in a diplomatic process that was not easy to engage with. The opposition to finding a solution was fierce in both Greece and North Macedonia. But an agreement was made and three years down the line it appears to be working.

On July 5th, Greece, Albania, and North Macedonia committed to continue working for the preservation of the Transboundary Prespa Lake Park. The announcement of transborder initiatives has become something of a routine. And it appears that the foundational agreement on which cooperation between Skopje and Athens is taking place could outlast the “changing of the guard” in government.

That relative success should not be taken for granted. Belgrade and Pristina have yet to succeed. Sofia and Skopje have yet to succeed. Even Zagreb and Lubljana have difficulty coming to an understanding. Bilateral diplomacy in the Balkans is famous for failing, not working.

Trying to understand how this particular agreement differs, Brussels Morning sat down with Mitko Arnaudov, an International Relations Researcher at the University of Belgrade, and an analyst that has worked for the Tanjung News Agency and the Serbian Economy magazine.

Angelos Kaskanis (АК): Is the Athens-Skopje diplomatic process truly an example for Southeast Europe? If so, in what ways is the Prespa agreement unque?

Mitko Arnaudov (MA): The approach to resolving the dispute between Greece and North Macedonia is a shining example not only in Southeast Europe, but more widely in Europe. Conflict resolution is indeed a very rare occurrence.

Success comes down to an alignment of political and personal circumstances that enabled a resolution to be reached, with which both sides were equally dissatisfied and was therefore sustainable.

Personality mattered. The former Greek Foreign Minister Nikos Kotsias has time and again reiterated that personal trust between him and the former Macedonian Foreign Minister Nikola Dimitrov was essential to resolving this dispute. This was matched by the excellent interpersonal relationship between prime ministers Zoran Zaev and Alexis Tsipras, both of whom have a reputation for being pragmatic politicians and looked at the notion of “national interest” as an adaptable category, not a concept cemented and out of context, decoupled from regional and international circumstances.

Looking at the methods of resolving the dispute between Greece and North Macedonia in 2017 and 2018, it is clear that this experience should set an example for Southeast Europe. One should learn from the success but also the challenges presented by the Prespa Agreement. Two elements are worth noting:

First, we must not neglect the essence of the dispute and the way historical narratives permeate the significance of the political negotiation. Second, one must recognise the difficulties of aligning the interests of political elites on both sides in a particular dispute that may not have an identical value framework but can share the same vision for the future.

Therefore, I believe that the resolution of the Greek-Macedonian dispute should be seen as a shining example in the wider European context. However, it would be very naive to expect the wider application of this model for a range of disputes that have hindered integration in Southeast Europe.

But, as Kotzias said, trust is gold. With hindsight, it is clear that interpersonal trust was key, as well as the willingness of politicians to take a domestic political risk, as it is rare (although not impossible) for politicians to risk their career in similar cases.

MA: From the perspective of regional security and stability, the Prespa Agreement had a catalytic domestic effect in North Macedonia. Should NATO and EU membership remain elusive for many years more, it is not clear that the country’s biggest minority, the Albanians, would remain committed to the country’s territorial integrity and sovereignty.

Perhaps the most noticeable contribution of the Prespa Agreement is that it addresses the interests of the Albanian minority which, while rhetorically respectful of the identity and interests of Macedonians, traditionally pointed to disputes with Athens (and now Sophia) as the main impediment to Euro-Atlantic intergration, painting the country as less-than-successful. This is no longer a viable narrative and, in this sense, the Prespa Agreement contributes to the country’s stabilisation.

The second contribution of the agreement relates to regional security; that is a key concern for Macedonian politicians, who have sought to preserve the territorial integrity of North Macedonia vis-à-vis Kosovo and Metohija, and wider Albanian irridentism that culminated in 2001. Today, the Western Balkans is not a region one may call “stable” but the adoption of the Prespa Agreement and the North Macedonian accession to NATO constitutes an affirmation of national sovereignty and the territorial status quo in the region.

In this context and in the same spirit, NATO allies should perhaps open new horizons in the negotiations between Belgrade and Pristina, providing a sustainable solution that does alter the territorial status quo, a principle that was not called into question even by Security Council resolution 1244/1999.  Following the settlement of the Greek-Macedonian dispute, it is also high time to resolve the “lyrical dispute” between Sofia and Skopje,  then Belgrade and Pristina.

AK: Therefore, you feel that the main contribution of the Prespa Agreement is the affirmation of the territorial status quo, reversing a wave of territorial revisionism.

Some of us in the Western Balkans have zero-sum aspirations. This can also be said of politicians in the West, because the objective of regional and European intergration is contradictory to the aspiration of national building. Do we really expect that the international recognition of statehood today will createa viable state tomorrow? In substantive terms, the reality is not articulated in political pamphlets.

Looking back to the Prespa Agreement, it is important that parties on both sides of the border remain committed to its implementation. The curse of politics in Southeast Europe is the sacrifice of international agreements for the sake of scoring domestic political points. The Prespa Agreement could not in itself lead to the maturity and diplomatic acculturation of local political elites. A deeper political understanding and substantive stability requires a “civilisational” transformation that goes beyond the Prespa Agreement.