The Five Star Movement leans to the left on immigration 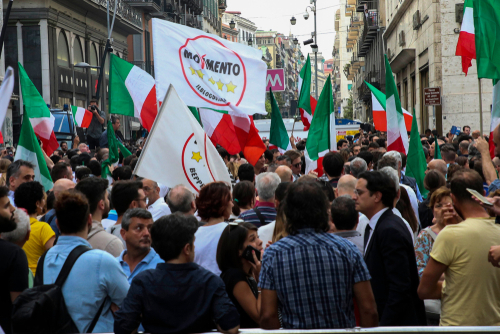 Brussels (Brussels Morning) The office of Italian Prime Minister Mario Draghi denied a report by La Repubblica newspaper on Tuesday that Italy is proposing an EU deal with Libya similar to the migration-regulating deal the bloc concluded with Turkey in 2016.

Some 13,000 migrants have landed on Italy’s coast this year, mostly coming from sub-Saharan Africa via Libya. Meanwhile, the 2019 plan to redistribute migrants across the EU is not working. The European Commission has had no offers from member states to accept migrants landing in Italy.

On Tuesday, Italy’s Interior Minister Luciana Lamorgese called on the EU for a long-term “structural solution” on how to manage asylum seekers after thousands arrived on the tiny Italian island of Lampedusa in recent days. “It is necessary to carry out structural interventions in the system of managing the phenomenon inside the European Union with the activation of concrete, solid solidarity mechanisms”, Lamorgese declared

“Structural” in this case means either effectively disrupting the flow without casualties or the dispersal of those arriving to several host states, neither of which has ever happened.

Politically, the “hard ball” approach of flow disruption, in which Italy actively discourages the rescue of migrants at sea and shuts its ports to them, has been championed by the Lega party and spearheaded by Matteo Salvini. The second approach was pursued by the second Conte and Mario Draghi governments.

The common denominator has been the Movimento 5 Stelle (Five Star Movement), a leading partner in coalition governments since 2018. The party has lent its support to both migration approaches.

The movement has been called anti-immigration on more than one occasion, but it is unclear whether the movement accepts this as a badge of honour or regards it as defamatory. Brussels Morning talks to Laura Ferrara MEP, elected on an M5S ticket and a member of the Committee on Civil Liberties, Justice and Home Affairs (LIBE) to get a better grasp of Italian migration policy in Italy’s multiparty system.

Sarhan Basem, Brussels Morning. How close and how far is M5S from Lega when it comes to migration policy. In Brussels, which political group do you seek allies from, given your policy of non-alignment.

Laura Ferrara, MEP. While recognising that the migration challenge for Italy, as a border state, deserves considerable attention, Lega and M5S have always had a very different approach to migration policies. Whereas Salvini has politicised the migration issue, criminalising not only people who are forced to flee their countries because of conflict, famine or inequality, but also the fulfilment of our obligations under international law to rescue at sea; his approach to shielding our borders is blind to respect for human rights and far from sustainable.

On the contrary, we in M5S have always supported the importance of a European migration management and asylum system with common rules, and we actively work towards greater solidarity with the countries of first entry and a more equitable sharing of responsibilities. Yet today, there is still a lot to be done for a better management of migration flows that safeguards the human right to asylum, that does not make the Mediterranean Sea swallow more human lives and that destroys the business model of criminal organisations.

In the European Parliament, we have always voted on these issues in a very similar way to political forces such as the Greens and Socialists. The Lega, however, has never been willing to adopt a constructive approach taking all these issues into account, but instead takes a dehumanising and anti-immigrant approach, and this fundamentally distances us.

LF. It is true that the demographic decline in Italy coupled with the economic crisis, aggravated by the current pandemic, poses a challenge to our socio-economic model. In this context, migration already is and will be increasingly essential for the Italian economy and society, both because of the financial contribution of foreign workers and because of the ageing of our population. However, increased fertility or immigration alone have a limited effect on the labour force dependency ratio and on the sustainability of the pension and welfare system.

The most effective approach for immigration to make a fundamental contribution to solving demographic decline and maintaining our economic dynamism is to improve the economic and social integration of immigrants in Italy. And in this regard, unfortunately, integration and inclusion policies have been largely disregarded in the New Pact on Asylum and Migration. Within the European Parliament, we are working to strengthen the new strategy of the Commission in this field, since integration policies are key for our economy and welfare but also for a more efficient management of migratory flows.

All of this is in combination, of course, with efforts to recover from the current crisis and gradually increase the employment rate.

SB. Italy’s care economy, artisanal networks, and agriculture are founded on immigrants. Should there be taxation without representation?

LF. There is a significant proportion of migrant people working in these sectors, given that in recent years certain jobs have become unattractive to local workers and have created a structural demand for foreign labour. While the irregular situation of many workers was already a concern, with the economic, health and social crisis left by Covid-19, migrants are particularly vulnerable to exploitation at work as “caporalato”, to obstacles in health care and to difficulties in finding affordable and decent housing.

Among the measures adopted to protect the rights of these people and to meet labour market needs in these sectors. the regularisation of their status as migrant workers marks a step forward. However, temporary, indiscriminate, and selective regularisation cannot be the only answer. Above all, it is not enough to prevent and combat the exploitation of migrant workers.

The first thing we need is to create more legal and safe avenues for labour migration to Europe. We have recently adopted in the European Parliament an initiative report to this end. Secondly, we must not stop fighting the mafias that profit at the expense of depriving migrants of their most basic rights, particularly in the agricultural sector and in southern Italy. With all this, we must move forward to avoid the tyranny of taxation without representation.

SB. Italy, Spain, Greece, France and other EU member states have a massive informal economy. Are migrants the problem or a dimension of “business as usual”?

LF. Informal labour markets exist in all countries. The migration issue plays an important, but not exclusive, role in this regard. In Italy, too, there are many nationals who lack formal employment, especially in the south. In relation to migrants, as I have already said, we must focus on effective integration policies and on providing more legal avenues to work. Although often neglected as “business as usual”, integration into the formal economy enables migrants and asylum seekers to contribute to the tax base and decrease their overall fiscal burden on the system. Without increasing our efforts in this direction, we would be feeding the creation of a parallel labour market of foreigners, refugees and migrants at risk of social exclusion and deprivation of their basic rights.

SB. Italy and Greece view migration as a problem of European solidarity that can’t be limited to border controls.  As the summer nears and the boats from Libya will embark for Sicily, what would you like to see happen?

LF. Exactly. The meaning of European solidarity cannot be reduced to leaving the burden of migratory flows upon the countries of first entry. Because it is neither fair, nor humane, nor sustainable. Looking ahead to the summer, despite the pandemic – and because of its socio-economic impact on the countries of origin – it is to be expected that many people will continue to risk their lives in the Mediterranean. The pressure on our islands and border cities is becoming unbearable, added to the health emergency in which we still find ourselves. This means that we cannot offer sufficiently dignified reception conditions nor guarantee efficient asylum procedures.

This is a structural problem that concerns all Member States and cannot be solved by “closing the gates”, because when migratory channels are restricted, only criminal organisations reap the benefits. In this regard, we have seen how the lockdown and closure of borders, because of the Covid-19 response, reopened among others, the deadly route to the Canary Islands. The only effective and sustainable solution to this challenge, which is a common one, is to establish a European framework for a fairer sharing of responsibilities that finally shifts away from the inefficiency of the Dublin system. From M5S we are working for the New Pact on Asylum and Migration to provide for this, as well as to set out obligations of solidarity between Member States, to avoid further suffering of human lives.

In the meantime, one solution I would like to see this summer would be the reinstatement of a relocation programme between Member States, which, even on a voluntary basis, would already mean a considerable relief of pressure upon Italy.