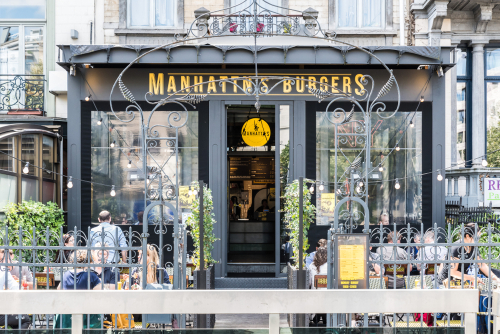 Brussels (Brussels Morning) At the crossroads of Chaussée de Boondael and rue Emile Banning, an electric generator installed by the restaurant Manhattn’s Burgers angered residents in October. They had launched a petition for noise pollution before a solution was found with the operators.

But now, it is the fireplace of the same restaurant that poses a problem. “ We breathe seven days a week, from 9 am to 10.30 pm, nauseating smells of burnt meats and fats and fried foods… It stinks all over Banning Street and part of it.”, explains a resident of the district, who also mentions “the illegal installation of a fireplace on the wall of the house without the permission of its owner.

A petition was launched on this subject in November and was signed by about sixty residents.

The municipality of Ixelles responds to residents

The petition was then sent to the municipality of Ixelles, which indicated that they had asked the competent services to provide them with all the necessary information and thus to check what was exactly in the license.

“Regarding the Manhattan’s Burgers, places have the allocation of drinking establishments with restaurants. They can therefore be exploited since the assignment is respected. The legislation in force regarding operating hours is federal. Each Horeca can be more or less sensitive to its neighborhood but the legal aspects are met again and we note that certain questions in this context are not currently governed”, says the mayor.

“Not a word on nuisance”

A response from the town is far from satisfying the residents. “There is not a word about the intolerable odor and noise pollution that we have been experiencing for weeks”, regret the residents.

The residents have therefore sent a second letter to the mayor, in which they state that they regret that the municipal response covers only the commercial aspects, but not that of these nuisances, and the chimney which “does not comply with the planning permission. and should, therefore, logically, be withdrawn immediately”, indicate the residents in their letter.