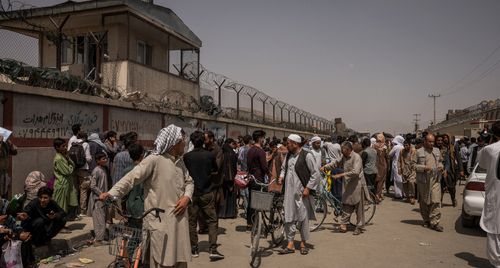 Brussels (Brussels Morning) Two suicide bombers have killed dozens at the Hamid Karzai International Airport on Thursday, including US troops.

A senior Afghan health official pointed out that the explosions killed at least 60 Afghans, adding that many more are in critical condition, according to The Guardian reporting on Thursday.

The Pentagon confirmed that US troops were wounded and killed in the attacks, condemning the suicide bombings as heinous, according to DW reporting.

General Kenneth Franklin McKenzie Jr., commander of the US Central Command, pointed out that 12 US troops were killed and 15 wounded in the attacks.

Comments on the suicide bombings

UK Prime Minister Boris Johnson commented on the attacks, decrying them as “barbaric” and announcing that Britain will continue with evacuations.

German Defence Minister Annegret Kramp-Karrenbauer noted that German troops withdrew from Afghanistan on Thursday after flying out more than 5,300 people.

She noted that a German medical evacuation aircraft is prepared to fly to Kabul to help with evacuation of people injured in the attacks.

Dominic Raab, UK Secretary of State for Foreign, Commonwealth and Development Affairs, expressed condolences to the families of victims and added that the US troops that died “paid the ultimate sacrifice while helping others reach safety.”

He announced that the UK and the US will continue to evacuate as many people as possible and concluded “we will not let the cowardly acts of terrorists stop us.”

A Taliban spokesman denounced the attacks, stating that the group “strongly condemns the bombing of civilians at the Kabul Airport.” A Taliban official later noted for Turkish Habertürk TV that such attacks occur “because of the presence of foreign forces.”

Earlier this week, the US warned that terrorists threatened to attack the airport in Kabul, with intelligence reports pointing to the IS Khorasan Province (ISKP).

Later on Thursday, the IS claimed responsibility for “the martyrdom operation near Kabul Airport” through the Amaq News Agency.