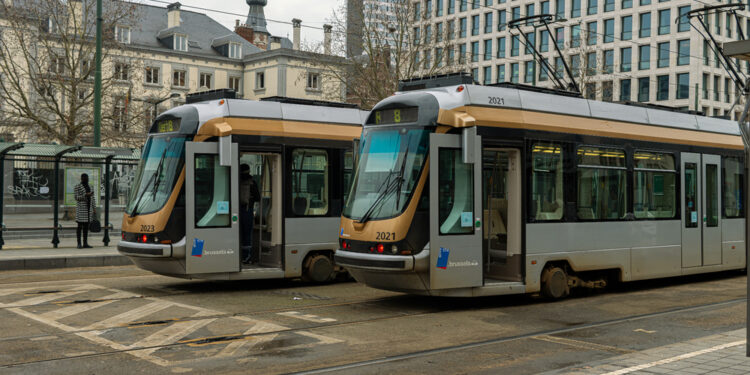 Brussels, (Brussels Morning)- STIB trams, metros and buses have never covered as many kilometres as in 2021. That is a record despite the second corona year in which travellers still stayed away. This is apparent from the 2021 annual report that the Brussels public transport company has just published.

The year 2021 will be dominated by the recovery for STIB, said BRUZZ. In total, the vehicles of the Brussels public transport company covered 50.6 million kilometres in 2021. A record and 9.7 percent more than in 2020.

Now it is up to the travellers to return. In 2021 there were 273.8 million travellers. That is 12 percent more than in the first corona year 2020 and only 64 percent of the total in the reference year 2019. Yet 2022 already shows promising figures.

“Today we notice that on certain days we are even up to 110 percent of the occupancy compared to pre-Covid in 2019. In a normal week we are at 80 to 85 percent with important peaks on Saturdays, for example,” says CEO Brieuc de Meeûs. . “Everything we have invested in the past is now bearing fruit. It was the good choice of the Brussels government to continue investing,” he says.

The metro remains the most popular with a market share of 35.2 percent, followed by the tram with 32.9 percent and finally the bus with 31.9 percent.

The good results from the annual report are in line with the results of the satisfaction barometer that were published earlier. Then it turned out that travellers gave the Brussels public transport company a score of 7.3 out of 10. With this, STIB is approaching the target of 7.4 out of 10.

The latest satisfaction barometer also shows that the new users are usually quite young. Contactless payments stand out among the services they value most, with the highest score ever in the barometer: 8.5 out of 10.

Investing in the grid of tomorrow

As for the metro, STIB started with the installation of a new signalling system under the name “CBTC”, which stands for “Communications-Based Transport Control system”. This should enable a further increase in frequencies and automatic driving, which amounts to a frequency of 90 seconds.

Two more digital innovations: a new app is in the works: Move Brussels, the MaaS app of the STIB, which stands for Mobility as a Service. The app brings together different operators to encourage the combination of soft modes and drive a shift. The MaaS app is scheduled to launch in the fall of 2022.

The launch of the digital Brupass, with which you can buy your ticket and validate it in the mobile app, is planned for 2023.