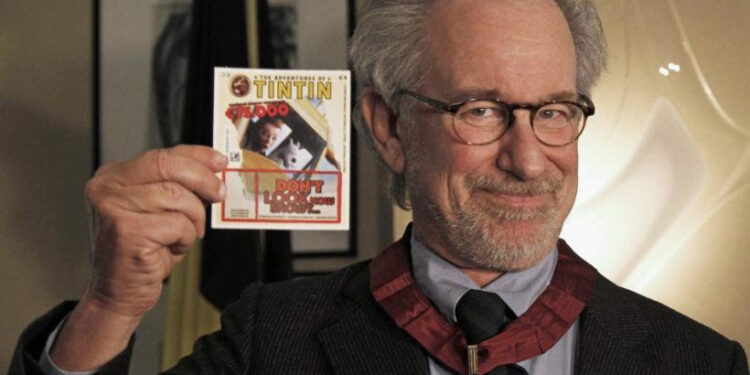 Spielberg in Brussels...Accepting the Commander of the Order of the Crown Award

Belgium, (Brussels Morning Newspaper) To make any type of connection between American film director Steven Spielberg and Charlemagne, Emperor of The Holy Roman Empire, might seem like an impossible stretch. The two are separated by 1300 years of history, made different contributions to humanity, have different life stories, and are famous for different reasons. But the two men do indeed have a connection—-a link that tells us something about Belgium. Consider…

Steven Spielberg needs no introduction.  American film producer and screenwriter, he is inarguably the most commercially successful movie director of all time. In 2013 Time magazine named him one of the most “Important People of the Century.”  Jaws, Close Encounters of the Third Kind, Indiana Jones, The Color Purple, Jurassic Park, Schindler’s List, Saving Private Ryan—- are just a partial list of some of his movies.  Another of Spielberg’s successful productions, albeit less well-known, The Adventures of Tintin, links us to Belgium.

Spielberg was a long admirer of the Belgian cartoonist known as Hergé. George Remi (born 1907 in Etterbeek, Belgium) writing under the pen-name of Hergé,  developed a popular art form known as Bandes Dessinées —literally “strips stories”. Created for readership in Belgium and France, these stories shared an artistic and commercial market where national identity often blurred—-such is indeed the case in Belgium. Since the 1930’s the strip has morphed into an art genre that resembled more of a “graphic novel” than a comic strip. One of the earliest examples of Hergé’s work was titled; The Adventures of TIntin. It is considered the starting point and archetype of this genre. Shortly after Hergé’s demise (1983) Spielberg, enamored with the Belgian’s body of work, bought the rights to The Adventures of Tintin. Unlike most American readers, Spielberg had read all of Herges works and wanted to introduce them to the world outside of Belgium. In 2011 he began production of his animated, digital 3-D movie —-a movie which would receive Academy Award and Golden Globe nominations.

What meant the most to Spielberg as he later noted, was receiving one of Belgium’s most honored award—Belgium’s Commander of the Order of The Crown —a meritorious top prize for service to the Belgian state. The distinction is the highest award one can receive in their field and in Spielberg’s case, it was for the film arts. Upon presentation, Prime Minister Dider Reynder’s praised Spielberg’s patience and commitment to Hergé as a Belgian icon. Spielberg responded to the prime minister that in “no other country have we considered premiering Tintin in …. Belgium was the birthplace of Tintin and he insisted on Belgian screenwriters to capture the subtle Belgian essence”. Over his career. Spielberg has won many awards— Academy and Golden Globe Awards, A Kennedy Center Honor, Cecil B. DeMille Award, etc. But he considered the honor of being awarded Belgium’s Commander of the Order of the Crown one of his highest honors.

Charlemagne (742-814) the first Holy Roman Emperor— united western and central Europe for the first time since the classical era of the Roman Empire three centuries earlier. His reign initiated the Carolingian Renaissance —a cultural and intellectual revival. Born in Herstal- Liège area (in what is now Belgium), Charlemagne is characterized as a legendary figure with mythical qualities.  Even after 1300 years, he still has his admirers. In the United States, an organization called the Order of the Crown of Charlemagne still pays homage to the man. Membership in this society is an award to those individuals that have; “honored the name of Emperor Charlemagne and maintain the tradition of chivalry, knighthood and to recognized acts of merit.” The society’s mission statement is to preserve books on genealogy, family histories, relics, and documents that have maintained similar orders for centuries in Europe. The Order of the Crown of Charlemagne has active ongoing projects such as restoring the wooden door—-believed to be the oldest wooden door of the Middle Ages—at the Aachen Cathedral where Charlemagne attended church services daily. It is believed Charlemagne walked through this door daily. Other projects involved works of fiction and non-fiction by members of the Order that embrace Charlemagne. Members also lecture and hold workshops with Charlemagne themes.

Six degrees of separation is the notion that everybody on the planet is connected by a chain of personal relationships. Human interconnectedness can take many forms intersecting regardless of the passage of time, achievement or country of origin.  Perhaps it is not a stretch for Steven Spielberg to shape Belgian culture into yet another one of his masterpieces. Perhaps it is not hard to fathom that the legacy of Charlemagne lives and breathes some 1300 years after his demise in a country across the ocean. What’s interesting is that for both Spielberg and Charlemagne, Belgium is the common denominator.