Stabbing at the Beurs metro station: police looking for perpetrator 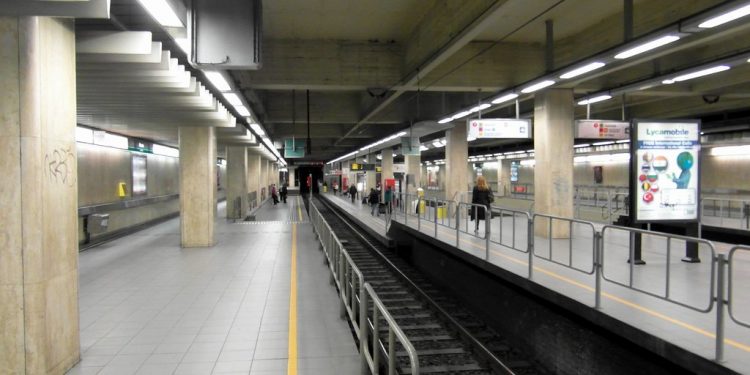 BRUSSELS (Brussels Morning) – A stabbing took place in the Beurs metro station on Friday evening in which at least five people were involved. One victim ended up in hospital and gave police names of possible suspects. No one is in mortal danger.

At around 8.42 p.m. on Friday evening, STIB received a report of a brawl between third parties, STIB spokesman Guy Sablon confirmed. “However, by the time the police arrived, those involved had already started walking. STIB has cordoned off and cleaned up the scene of the fight.”

The Brussels prosecutor’s office confirms that there was a stabbing involving at least five people. “When the police arrived, everyone was already gone,” said public prosecutor Martin François.

Shortly afterwards, however, one of the victims reported to the hospital with injuries. He was stabbed three times, two of which in the leg. According to the public prosecutor, the person is not in a life-threatening situation, but he did provide the police with the names of four possible suspects. “The police are currently questioning three of those suspects, but at first sight they do not appear to be the perpetrators. The police are continuing to search for the perpetrator. The investigation into the exact circumstances is still ongoing.”

A stabbing happened at the end of May 2021, a 36-year-old woman was stabbed in the street in Evere while walking with her two-month-old baby. The woman was taken to hospital, where she died of her injuries. The baby was unharmed. Shortly after the facts, a 21-year-old man with mental problems was arrested. He hung out in the street with bloody scissors, but in the end the man was found innocent and he was released. The blood on the scissors did not come from the victim, but from himself.

The police were then able to arrest a 26-year-old man from Evere. During a search, a bloodied sweater and knife were found. After analysis, the blood turned out to come from 36-year-old Mounia Ouyahia. The suspect was placed under an arrest warrant by the investigating judge. The man appears to have serious psychological problems. He is schizophrenic and also suffers from severe hallucinations.

After the investigation was completed, the public prosecutor’s office advanced the internment of the suspect, which the council chamber discussed today.