Rumours of the end of the Biden presidency greatly exaggerated 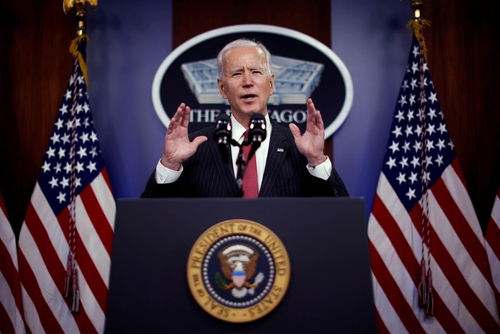 New York (Brussels Morning) American media insistence on worshipping at the false altar of both- sides-ism as well as the Washington DC culture in which it is much more career-damaging to be alone than to be wrong, has led to a growing consensus that Joe Biden is a failed president. Biden has certainly struggled to pass his legislative agenda and to fight a COVID pandemic that is exacerbated by GOP policies, particularly at the state and local level.

However, to paraphrase Mark Twain, rumours of the demise of Biden’s presidency are an exaggeration. The problem is that in politics, rumours become self-fulfilling prophecies. The constant repetition of the Biden has failed theme can lead people to believe it and to form a negative opinion about the President, which, in turn, could lead to a rough electoral future for Biden and his party.

There is no question that Biden’s presidency has hit what might be charitably described as a rough patch. His legislative agenda is struggling on the twin shoals of GOP opposition and the egotism and self-righteousness of conservative Democrats like Joe Manchin and Kyrsten Sinema. Similarly, the Delta variant, bolstered by rightwing-led, anti-mask and anti-vaccination movements, continues to cause suffering and death while creating a massive barrier to full economic recovery. Biden has also been unable to magically solve problems of gun control, racial tensions, political polarisation or the enduring strength of Donald Trump’s MAGA cult.

Biden has made several mistakes as well. With regards to both the US withdrawal from Afghanistan and the seemingly endless debate around his two major spending bills, the infrastructure bill and the Build Back Better initiative, the White House has lost control of the narrative. In the case of the former, the early chaos in Kabul overshadowed what was both a bold and appropriate strategic decision and an ultimately extremely successful evacuation effort. With regards to the latter, the story has become one of Democratic infighting and inability to govern rather than what will ultimately be two spending bills that will help rebuild the country’s infrastructure while making life tangibly better for millions of Americans.

There are two clear reasons for this, neither of which is altogether surprising or easy to address. The first is that the GOP continues to prioritise fealty to their cult leader Donald Trump, not simply over working with Biden, but over governance in general. It would be foolish to expect the Republican Party to work with Biden. Most voters, on either side of the political divide, understood that when they went to the polls in November and recognised that Biden’s assertions that he was uniquely positioned to accomplish that were unrealistic. However, the Republican leadership’s lack of interest in governing, or more broadly of seeing the country governed by anybody, has turned them into a party of trolls. At the highest levels, they are focused on spreading disinformation about the January 6th insurrection, recklessly trolling Democrats with little regard for reality while burying themselves in the right-wing media ecosystem.

By not recognising that and by slotting Biden into the shopworn category of failed president about to be drubbed in the midterm elections — still more than a year away — the media not only gets the story wrong but contributes to the assault on democracy by missing the bigger story, the descent into authoritarianism and a fevered madness on the part of the Republican Party.

Fortunately for Biden, there is a way out of this morass, and it may be faster than it seems. The Delta variant is still devastating many American communities, but the numbers are dropping and the curve is in the right direction. If the Delta variant continues to recede in the next few months and is significantly down by January, then Biden’s presidency will begin to look much better.

Similarly, while the inability of the Democrats in Congress to agree on Biden’s spending proposals is now the major story-and one that is very damaging for Biden and his party, that too will change. It is extremely likely that a compromise will be reached. The combined five trillion in spending — 1.5 trillion dollars on hard infrastructure and 3.5 trillion dollars on social policy — will be reduced, perhaps to something closer to a combined three trillion. Yet even that will be a massive legislative victory that will change the US. If that happens, the Biden administration can spend at least some of 2022 breaking ground on infrastructure projects while voters will begin to see, or at least learn about, various other popular programmes such as a pre-school programme for three-and four-year-old children and an expanded Medicare.

There are never any guarantees in politics. Sinema and Manchin could decide to sabotage any major spending bill. The Delta variant could regain strength, or a more deadly and infectious new variant could emerge. Despite those possibilities, there is a clear path forward for Joe Biden’s presidency. A clear roadmap exists for improving his fortunes even though they may be at a lower point right now than at any time in his relatively young presidency.