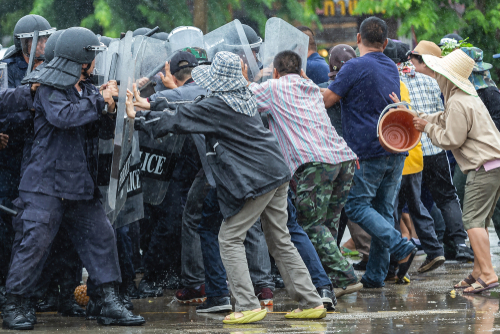 The company pointed out that soaring energy prices and cost of living could spark demonstrations and protests, according to Reuters reporting on Friday.

According to the company’s latest civil unrest index, the majority of nearly 200 observed countries face heightened risk of mass mobilisation in Q3 and Q4 this year, the highest number since the launch of the index in 2016.

The report warns that projected risk is highest in Bosnia and Herzegovina, Switzerland and the Netherlands.

“Over the winter, it wouldn’t come as a surprise if some of the developed nations in Europe start to see more serious forms of civil unrest,” Soltvedt pointed out.

Growth of food prices picked up pace after the start of war in Ukraine and reached all-time highs earlier this year, in February and March.

At the same time, energy prices are rising sharply in Europe, continuing trends from 2021.

Jimena Blanco, chief analyst at Verisk Maplecroft noted “we still have some of the fallout from the COVID pandemic playing into this, with existing supply chain disruptions.”

In addition, low water levels and droughts are driving up prices of food and energy in many parts of the world, with Verisk Maplecroft pointing out that these factors increase the risk of social unrest.

According to the report, social discontent is rising in developed and developing countries alike, and fuelling peaceful demonstrations as well as violent protests.

Rise of civil unrest from Q2 to Q3 was highest in Cyprus, Mauritius and Ukraine. Russia was seventh on the list and Norway 13th.

Verisk Maplecroft reminded that large protests erupted in Argentina, Ecuador and Sri Lanka earlier this year over rising inflation, stressing that the worst is yet to come.

“We’re talking about numerous powder kegs around the world simply waiting for that spark to be ignited… we don’t know where that spark will come first,” Blanco concluded.