Infantino, in fiery statements: Europe is hypocritical because of Qatar! 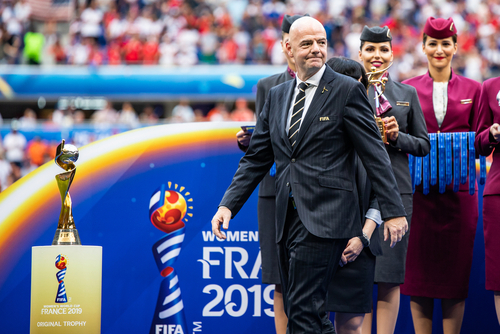 Belgium (Brussels Morning Newspaper) FIFA President Gianni Infantino made fiery statements at a press conference he held today, Saturday, 24 hours before the start of the 2022 World Cup. Infantino responded to the sharp attack on Qatar by the European media.

He added, ” I think for what we Europeans have been doing for the last 3,000 years we should be apologising for the next 3,000 years before starting to give moral lessons to people”.

“Of course I am not Qatari, I am not an Arab, I am not African, I am not gay, I am not disabled. But I feel like it, because I know what it means to be discriminated against, to be bullied, as a foreigner in a foreign country.

On accusing Qatar of causing the death of many migrant workers who contributed to the construction of the stadiums, Infantino replied : “If Europe cares about migrant workers, it could have approached what Qatar did by establishing legal channels, and this does not mean not mentioning that some issues still need to be addressed in Qatar.

“This moral lesson is one-sided is just hypocrisy. Conditions of migrant workers in Qatar are better than conditions of immigrants in Europe,” he stressed.

Infantino added that European nations now closed its borders to immigrants who wanted to work there, whereas Qatar had offered opportunities to workers from India, Bangladesh and other southeast Asian nations through legal channels

He continued, asking, “How many European and Western companies are making millions, if not billions, from Qatar? Who discussed immigrant issues with the authorities there? No one, because if you change the law, that means less profit, but we did that. FIFA got much less than many companies here”

“The State of Qatar welcomes everyone, regardless of their orientations, and everything is beautiful and everyone feels happy here in Qatar,” Infantino said.

Infantino moved to talk about not allowing alcohol to be sold inside stadiums. “Honestly, if this is the biggest problem we have for the World Cup I will sign immediately. Let me assure you that every decision that is taken at this World Cup is a joint decision.”

“It is discussed, debated and taken jointly. There will be many fan zones: eight to 10. Over 200 places you can drink alcohol. I think personally for three hours a day if you cannot drink, you will survive. The same rules in France, Spain and Scotland, where no beer is allowed in stadiums.” He concluded.