Proximus to Offer Internet 10 Times Faster in Belgium This Year 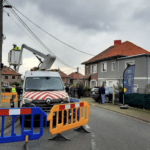 Belgium (Brussels Morning Newspaper) The country’s top mobile provider, Proximus, has pledged to roll out 10 Gbps internet to all of its customers in Belgium this year. This is ten times faster than the current top speed in the country. The company will offer this high speed to both companies and consumers in a rollout that will be fully operational by the end of 2018. It will also be offered to businesses and government organizations.

The company started deploying fiber in Antwerp in 2017, starting with a trial in the Deurne neighbourhood. As of this writing, over 80,000 homes have been linked to the company’s network. That means one in four people living in Antwerp can now access the internet. The rollout will accelerate in the years between 2021 and 2023. The rollout will take place in collaboration with local authorities, and the company says it will provide a dedicated telephone number to its customers. The plan is to complete the fiber rollout by 2023.

As a result of this agreement, Proximus expects to roll out fiber faster in Wallonia than it did previously. The goal is to reach 70% coverage in Belgium by 2028, but in the meantime, the company plans to roll out the technology to all of the telecom companies in the country. The new network will be available to all Belgian operators at the same price and terms.

With the competition for the country’s telecom market increasing and prices falling, the company must find new ways to attract new customers. This is one of the reasons why the company has had to introduce a subscription for 10 Gbps internet speed. However, this subscription is not available to all of the company’s customers in the beginning. Therefore, the speed may be limited to a select few in the first stage.

In January, Proximus CEO Antoine Bouton signed a new deal with ORES. The company has used ORES’s poles to connect fiber to its customers. The two companies have a history of working together to provide better coverage and higher speed. The new agreement will include optical fiber routed through electric poles. Although it is not a complete deal, it will allow them to continue working together.

The company’s commitment to innovation continues to make it a leader in next generation networks. The company partnered with Nokia to build the largest fiber access network in Belgium. The company has successfully connected 533,000 households and businesses to this technology. In total, the ambition is to connect 4.2 million homes and businesses to the new network by 2028. This will mean that the Belgian population will be covered by the new technology by the end of the year.