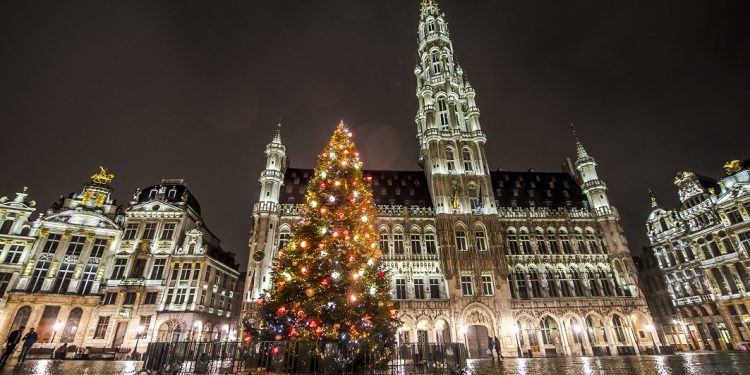 Brussels (Brussels Morning) The 20th edition of Winter Wonders opened on Friday noon in Brussels without much noise and an inaugural party, to avoid crowds due to health restrictions. The Christmas tree in the Grand-Place will light up at nightfall and a sound and light will punctuate the evening.

The show will be repeated every evening until the close of the Winter Pleasures on January 2.

Reinforced health rules were decided by the City in mid-November. The Christmas market route has been extended to facilitate attendance.

A bracelet is mandatory for all visitors aged 16 and over to consume, make purchases and enjoy the attractions. These passes will be issued daily at various points along the route upon presentation of the Covid Safe Ticket and an identity document.

Wearing a mask is also compulsory for anyone aged 10 and above on the entire course.

The 800 m2 skating rink will only be able to accommodate 200 people at a time, with Covid Safe Ticket controlled for those over 16 years old. The entrances and exits will be separated and a sense of skating must be respected.

Burgomaster Philippe Close advised unvaccinated people not to go to the Winter Pleasures.

The Brussels parking agency parking.brussels announced on Friday that the Ceria and Kraainem car parks will be freely accessible during all Winter Pleasures weekends. Cyclists will have free use of two bicycle parking spaces with 50 spaces each, supervised by guards, located on Rue du Marché aux Porcs and boulevard de l’Impératrice.

The train brought to light

This edition highlights the train, echoing the European Year of Rail and the theme of the biennial Europalia festival. An immersive 270º video-mapping will exhibit on the Place du Musée the Europalia exhibition “Voies de la modernité”, which takes place in the Royal Museums of Fine Arts of Belgium.

The Galaxy Express wagon, a 25-meter-long audiovisual installation inspired by the manga series Galaxy Express 999, will also welcome passers-by in front of the central station. A trompe-l’oeil fresco will present the North / South railway junction.

The Manneken-Pis opens the 20th edition

On the occasion of the opening of the 20th edition of the Winter Pleasures on Friday in Brussels, Manneken-Pis was offered an SNCB train attendant costume in the afternoon.

The ceremony took place in the Militia Room of the City Hall of Brussels in the presence of the Alderman for Tourism, Culture and Major Events Delphine Houba, the mayor Philippe Close and members of the Order of the Friends of Manneken-Pis.

The costume was handed over to the City of Brussels from the hands of the SNCB manager Sophie Dutordoir. It is composed of an outfit, shoes and a navy blue kepi, with a few lines of a lighter blue. This is the 1078th Manneken-Pis costume.