NMBS continues tunnel under Schaerbeek station towards the canal 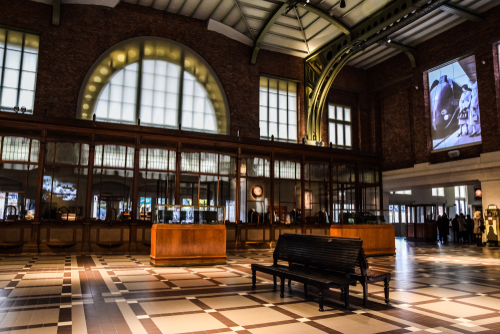 Belgium, (Brussels Morning Newspaper) The NMBS has started to open the underpass of the Schaerbeek station towards the canal. By the summer, travellers and Schaerbeek residents should be able to enjoy a much shorter route to the Docks Bruxsel shopping centre and the canal.

As reported by BRUZZ, Excavators have broken up the wall at the end of the underpass under the tracks of the Schaerbeek station in the past two weeks, and reinforcements are currently underway. “Work on the outside of the tunnel had already started last summer,” says NMBS spokesman Dimitri Temmerman.

The railway company had already included the opening in the priority list of its multi-year investment plan 2018-2022. This was because the Docks shopping centre opened its doors on the canal in 2016, just in Brussels City, but a stone’s throw from the Schaerbeek station.

In recent years, Schaerbeek station has become a hotspot for railway runners, who could see the shopping complex nearby from the platforms.

Still, train passengers still had to walk a lot to reach Docks. After all, the tunnel under the platforms now ends on a blank wall in the direction of Vilvoordelaan. Until now, anyone who wants to reach Docks, but also the canal or, say, the Groene Wandeling along the royal domain on foot from the station area, has to detour along the busy Van Praetlaan/bridge.

As a result, Schaerbeek station has become a hotspot for railway runners in recent years , who could see the shopping complex nearby from the platforms. With the prohibited rail crossing, they wanted to shorten their route to Docks, Infrabel reported in 2019.

Although the NMBS itself advertises on its website a train ticket to visit Docks – “a Brussels shopping complex just a few steps away from Schaerbeek station” – this is currently not in line with reality.

As soon as shoppers can safely cross the tracks via the underpass, the walking route to Docks from the station will indeed be considerably shortened. The distance will drop from about 1.1 kilometres to about 350 to 400 metres, the walking distance will be more than halved. This makes the train a more attractive alternative. Cyclists must dismount in the tunnel under the platforms, as in any station, and hold their bicycles. (Read more below the photo)

The work was originally supposed to start in 2019 and last for one and a half to two years, but due to, among other things, the many years of uncertainty about federal investments for rail, they suffered a significant delay.

In order to make it possible to extend the tunnel, the tracks farthest from the station had to be decommissioned first by rail infrastructure manager Infrabel. It concerns two freight tracks that were part of the compulsory demolished railway line 26A . That already happened in mid-2020, when the tracks were also demolished. This cleared the way for the passage of the underpass. Freight trains now run via the Zennebrug rail junction and the platforms of Schaerbeek station.

After the works, the opened pedestrian tunnel under the platforms of Schaerbeek should lead to the Vilvoordselaan, near the regional container park. At the beginning of this summer, thanks to the tunnel, the train platforms and the Train World museum) should be directly accessible to all pedestrians from the canal.