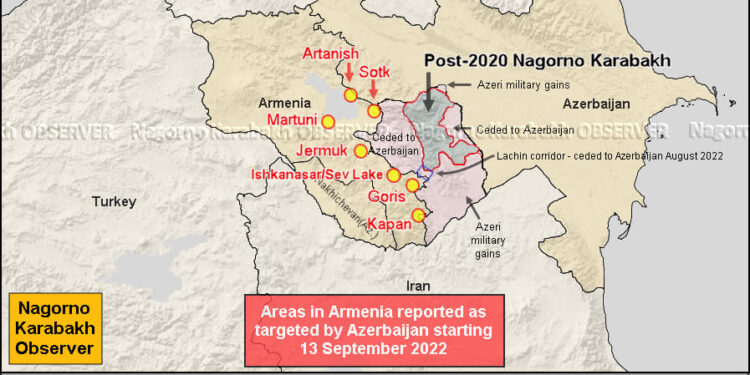 Greece (Brussels Morning) Fears of an escalation akin to the 2020 conflict were raised when artillery fire between Armenian and Azerbaijani military occurred close to Nagorno-Karabakh according to DW. For the early provocations, both parties laid blame on one another.

Around Monday midnight, three strategic points near the border were bombarded by Azerbaijani forces while Armenian troops were stationed there. According to Azerbaijan, it was in response to an influx of Armenian weaponry and landmines close to the border. In reply, Armenia returned fire.

The Azerbaijani Ministry of Defense responded with a statement acknowledging the strikes, but said the strikes are “small-scale” and “aim to ensure the security of Azerbaijan’s borders.” Based on the Armenian Defense Ministry’s public statement, the attack included drones and large-caliber weapons launched in the direction of Goris, Sotk, and Jermuk.

The Armenian community is extremely tired of the border hostilities. For many, this behavior of Azerbaijan simply wants to impose the country’s dynamics on the lost side of the 2020 war. Although a ceasefire and population exchange agreement has been signed, it is not being respected and many fear that a new war is likely.

Brussels Morning asked George Meneshian for a statement regarding the ongoing situation as a member of the Armenian Diaspora. Mr. Meneshian is a Political Advisor and the Research Coordinator of the Middle East Research Group in the Institute of International Relations, Athens.

You probably haven’t noticed, but Azerbaijan has started a new war against Armenia. Monday night, without any warning, Armenian civilian infrastructure, towns, and villages (the yellow dots on the map) were bombed – that is, civilians were targeted – and an attempt was made to occupy Armenian territories. Azeri forces are using Turkish drones, heavy artillery, and ballistic missiles. The losses are high and the destruction in the Armenian desert areas is significant.

The attack took place while the two sides are in dialogue and are no different from the unprovoked Russian invasion of Ukraine. As expected, the reaction of the international community was not satisfactory. Russia, having close ties with Azerbaijan, and because of its defeat in Eastern Ukraine, will not act against Azerbaijan. He doesn’t want to and can’t do it. Turkey supports Azerbaijan, despite efforts to normalize relations with Armenia. Cavusoglu made it clear today. And the attitude of the European Union is disappointing.

With the war in Ukraine going on, nobody wants to deal with the Caucasus. Both the US and Russia do not want to imagine a possible conflict in the Caucasus. They don’t care, they regard it unnecessary and in the end, they consider the case closed one way or another in 2020. This attitude/policy of theirs can also be seen in their statements.

“The United States is deeply concerned about reports of attacks along the Armenia-Azerbaijan border, including reported strikes against settlements and civilian infrastructure inside Armenia,” Blinken said in a statement. “As we have long made clear, there can be no military solution to the conflict. We urge an end to any military hostilities immediately.”

The Russians are a bit more “spicy” since they state that any violation between Armenia and Azerbaijan also affects relations with Moscow.

“We call on the parties to refrain from further escalation of the situation, exercise restraint, and strictly observe the ceasefire in accordance with the trilateral statements of the leaders of Russia, Azerbaijan, and Armenia of November 9, 2020, January 11, and November 26, 2021,” a Russian foreign ministry statement said.

“We are in close contact with Baku and Yerevan. An appeal was received from the Armenian leadership to assist in resolving the situation … We expect that the agreement reached as a result of Russian mediation on a ceasefire from 9.00 am Moscow time on September 13 will be carried out in full,” it added.

Azerbaijani President Ilham Aliyev’s office claimed in a statement that the country’s armed forces were in control of the “situation along the border” as the combat appeared to be slowing down. The situation is still “very tense” in several border districts, according to Armenia’s defense ministry.