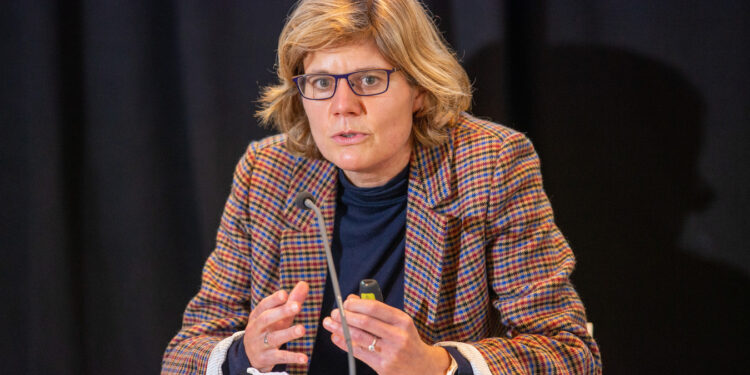 Brussels, (Brussels Morning)- With autumn in sight and a possible increase in infection figures on the way, the new awareness and vaccination campaign was also presented this afternoon. Brussels Health Minister Alain Maron and head of the Brussels health inspectorate Inge Neven want to anticipate an outbreak of the corona virus and protect vulnerable people with a second booster shot.

“Last year’s vaccination approach has worked,” said Corona crisis manager Inge Neven. In particular, the decision to make vaccines available at pharmacies turned out to be a good one.

“About half of the vaccines distributed in Brussels were distributed through pharmacies,” said Neven, to a BRUZZ reporter. This success could be explained by the fact that the pharmacy is often “very local and easily accessible, and moreover it often involves a confidential adviser”, she continues.

The fact that this approach has worked is reflected in the figures today. The Covid situation in Brussels is still stable at the moment. “The numbers are moving well. There has been a small resurgence in recent days, but this is due to the fact that many people are returning from vacation and are therefore also being tested more,” says Neven.

Of course, this does not mean that Brussels residents should not prepare for winter. Last year we already saw fewer hospital admissions thanks to the vaccinations, but according to Neven it is “hugely important that we all adjust our mode together now to avoid new, restrictive measures.

Firstly, the campaign points out that it is important to protect especially vulnerable people. In addition, ensure good ventilation of indoor spaces. If that is not possible (or you cannot keep enough distance), it is best to wear a mouth mask.

Fourth, we are encouraged to organise group activities outside as much as possible. The campaign reminds us once again that vaccination is free and voluntary, protecting against all forms of Covid-19. Finally, if you have symptoms, get yourself tested and self-isolate.

From next week, the posters of the new awareness campaign will be distributed in eleven languages ​​via traditional channels – such as general practitioners, pharmacists,… – and social media.

The second booster shot is not mandatory, but it is recommended, especially for the frail and the elderly.

From the beginning of September, all over-50s will be invited by letter and healthcare staff and residents of residential care centres and hospitals are also strongly advised to have the second booster shot.

The people who received an invitation can be vaccinated from 12 September by appointment. From October 1, all over 18s who want it can have a second booster vaccine without an appointment.

Please note: there must be a period of at least 3 months between the different doses. If you have only recently received your vaccine or booster shot, you must therefore wait until that period has expired.

The new vaccination campaign is being held in four vaccination centres. There are currently two centres in Brussels: Pacheco and Molenbeek. The centres in Vorst and Woluwe-Saint-Pierre will also open again soon.

The latter two vaccination centres reopen especially for the second booster. In addition, the campaign continues to run locally with vaccinations by mobile teams and above all an extensive network of pharmacists who also administer vaccines.

Inge Neven’s job is now over. For more than two years she was the face of the Brussels corona policy, much more than health minister Alain Maron.

The roll is now split in half. Olivier Delbauve, who already started in December, will take on the operational aspects and coordination. Delbauve previously worked for Doctors Without Borders and the European Commission.

France Dammel takes on the role of spokesperson. She is both a translator and a nurse by training and has spent the past two years working as spokesperson for Deputy Prime Minister and Minister of Social Affairs and Health Frank Vandenbroucke (Vooruit).

Dammel was particularly involved in communication about Covid-19 and took on the role of spokesperson for the crisis cell.