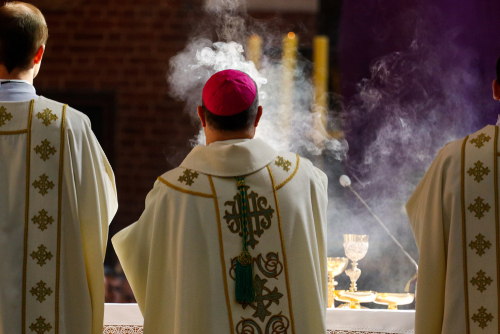 Torun Poland - April 18, 2019: Bishop censes incense during Chrism Mass in the Cathedral Church of St. John the Baptist and St. John the Evangelist

Brussels (Brussels Morning) Support for the Catholic Church in Poland has fallen to an all-time low of a mere 41%, far from the nearly universal 90% support the Church enjoyed in 1989 when Communist rule ended in the country. An increasing number of Poles are turning away from the religious institution because of its influence over politics and other areas of life.

“I used to think being passive was enough, but I decided to speak up”, 35-year old Katarzyna Lipka told Reuters, her view reflecting that of a growing number of young Poles who decided to formally cut their ties with the Church. “I want – and I think all those who are leaving the Church now want – to voice our objection to what is happening now. To influence politics, our rights,” Lipka declared.

The recent introduction of a restrictive law on reproduction that effectively bans abortion, which sparked massive country-wide protests, is only one aspect of the Poles’ objection to the Church’s influence on politics, public and personal life.

During the past five years – and in the past five elections – priests have regularly displayed election posters on parish property or talked about elections during mass, almost always favouring the governing party. Some 140 such incidents were recorded by local media during that period.

Even though the Church and the state remain separate on paper, the ruling Law and Justice (PiS) party is widely considered to be very tight with the Church authorities. The party has spent millions of euros on Church-run projects, and sees the Church and Polish national identity as one and the same. Public TV, run by a former PiS politician, features nearly nine hours of Catholic content per week, including church service broadcasts.

Senior Church officials have supported a government crackdown on LGBT rights, while same-sex marriage remains illegal in the country. In October last year, as Poland’s Constitutional Tribunal ruled that women should be prohibited from aborting a foetus with abnormalities, Polish Google searches for ‘apostasy’ – the process of leaving the Church – jumped to their highest since counting began in 2004.

Even though the Church stopped collating its data on apostasies in 2010, at least 577 people left the Church in November in Warsaw alone – more than during 12 months of 2019. “Whatever the reason, this is dramatic,” Archbishop Grzegorz Rys, one of Poland’s most senior priests, observed.