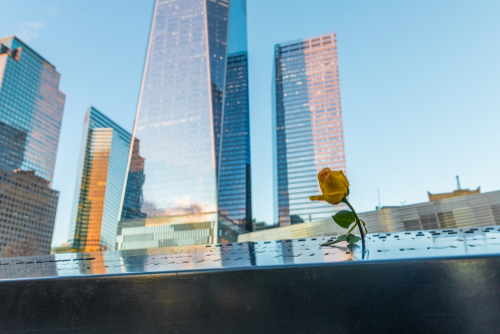 My young life has been shaped by more “crises” than I can count, but always 9/11 has stuck out as a day that changed the world. Twenty years on, as we mark the anniversary, my work has taken me to far-away places, where I have found friendship among those I once was told were the bad people, associated in one way or another with years of war. Today, I see it all differently – the then and the now.

Madrid (Brussels Morning) As the 20th anniversary of 9/11 approached, consumed as I have been by the withdrawal of the US from Afghanistan, memories of that traumatic day have re-entered my psyche, begging to be addressed. On September 11, 2001, I was in second grade, just two days away from my ninth birthday. I was excited about my homemade birthday cake and heading to soccer practice to share treats with my teammates. Instead, I went home that day and in many ways “grew up” far beyond my years.

In the course of the day a cataclysmic shift happened that would shape much of my young life and, in later years, my professional work. I remember a feeling of intense anxiety when I saw my second grade teacher’s face after she received a phone call from the office. She swiftly went out into the hall, tears visibly welling in her eyes. Mrs. George did her best to keep us calm, even as worried parents arrived to pick up student after student. There she sat, her face covered by her hands. Looking back, she was probably crying and anxious too to get home to her own family.

When dismissal finally came for those remaining in that room shut off from the world, we were but a few. The adults coming to pick-up their kids were drawn and somber-looking. I remember the pain of those faces staring back at me as I ran home as fast as I could. I needed to see my mom and get a hug, even though I had no idea what was happening. Aside from school pick up, there weren’t any cars on the street and it looked like most people were already home from work.

I walked in the front door to see my mom sobbing. CNN was blasting from the television. My dog stared at me with that worried look dogs have when they know something is up, yet it wouldn’t leave my mom’s side. I looked at the TV screen and kept repeating what’s that? Through heaving sobs she said that the US had been attacked and those were planes flying into New York’s twin towers. The images on the screen had shifted to other places – to the Pentagon, and the scene of a fiery crash. Throughout the day, CNN broadcast both live and in repeats appalling footage of small black objects falling from the sky, from the towers. They were people. They were parents. They weren’t ever going home to celebrate their kids’ birthdays.

The subsequent response was to shape my growing up, just as the memories of that day did.  Adults were saying “give them a taste of their own medicine”, “we have to go to war” and such like. The wars that followed went far beyond giving a taste of the prescribed “medicine”. The toll they exacted has been far greater. We can mourn for our own people under a half-mast flag and a shared sense of identity to such an extent that now, two decades later, the response to the recent Kabul Airport attack has been hyper-focused on the American lives lost, tragic of course, but a mere fraction of those killed.

The greater part of my life has been the experience of a citizen whose country is at war, yet it’s almost as if you’d never know it. For 19 of my 28 years the beat of the war drum has been an almost silent accompaniment. In that time, the US has experienced a “once in a lifetime economic crisis,” an attack by its own citizens on the very institutions of state, a pandemic, a second war, countless proxies, and the unraveling of values constitutional and otherwise under an unfit president, who saw fit to broker a reckless deal with the pariah Taliban leadership. Yet, the forever war was always there in the background, largely ignored or sparingly covered in the nightly news.

An “us-versus-them” narrative left the US military industrial complex to its own devices, at the expense of the Afghan people. Just as the Americans had been on 9/11, so too in 2021, the Afghans were people, were parents, weren’t ever going home to celebrate their kids’ birthdays. Yet, due to the pernicious practice of “othering”, somehow they meant less? The west and the US in particular, have a long and complex history of “othering” when it comes to identity politics in our own nation states, so taking the practice abroad is a mere extension – an extension though that has had real and lethal impact on the lives of many.

My Afghan friends are active on Twitter. Those who chose not to go or were unable to leave deserve our attention and concern in the months ahead since they will be forced to resist a return of the old Emirate Afghanistan. The Taliban say “you have the clocks and we have the time.” The concern is how long will it be before we begin to stop paying attention and look away? I truly hope this question remains unanswered and that we do pay attention and apply continuous pressure. Although we may have thought we were so different in the beginning, a more connected world has taught us just how untrue this view is.

Afghanistan needs the internet. Its people need not to be silenced. They need us to listen. Let’s set aside the idea that they are different, and instead look to find commonality. The identity politics that projected the idea of Muslims versus the world should end with the US’s military departure. Too many Afghans, Americans and allies were people, were parents, and were never able to return home for their children’s birthdays in the course of this 20-year war.