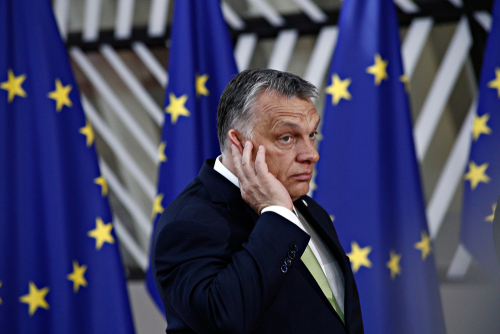 Belgium (Brussels Morning Newspaper) Latest polls show that the Hungarian right-wing Fidesz party continues to maintain a slim lead over the united opposition, giving hope to Prime Minister Viktor Orbán that he could remain in power even after the parliamentary elections on Sunday.

According to an IDEA Institute survey published on Thursday, Orbán’s Fidesz remains the primary choice for 41% of voters, ahead of the six-party opposition bloc, which currently has the support of around 39% of the voters.

The previous month, Fidesz’s support was at around 40%, while the united opposition had some 37%, showing a slight increase for both options, but the greatest change in the polls has been the number of undecided voters, which has fallen down from 11 to 6%.

Orbán, which has ruled Hungary since 2010, has consolidated his power in the country by gaining control of all state media and most declaredly independent outlets, through his network of connected businessmen.

He is facing the first serious challenge to his rule as six opposition parties, ranging from right-wing to far left, have struck an unlikely coalition deal with the sole purpose to oust Orbán from power.

The six parties chose their joint PM candidate in primary elections in October last year, agreeing on Peter Márki-Zay, an independent conservative candidate currently serving as the Mayor of Hódmezővásárhely, a small town in central Hungary.

Márki-Zay is a Christian conservative who holds degrees in economics, marketing, and engineering, and is seen by many analysts as the most likely contender to draw away the conservative vote, which might otherwise fear switching from Orbán to the opposition.

Márki-Zay has campaigned on an anti-graft platform while blasting Orbán for his close ties with Russia, China, and Turkey, maintaining his allies oppose European values.