Beijing sides with Moscow ahead of EU-China summit

Russia's invasion of Ukraine was always going to leave China in a difficult spot. 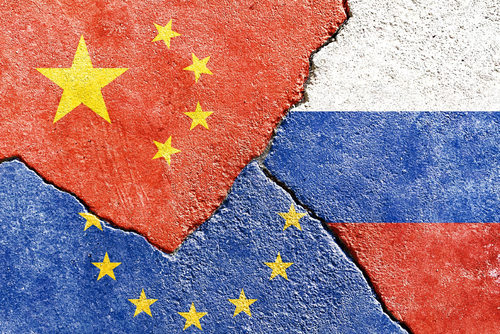 Belgium, (Brussels Morning Newspaper) China has redoubled its political support for Russia’s war in Ukraine, auguring badly for EU efforts to break their new axis. Beijing’s burgeoning partnership with Moscow, and its sympathy for the Russian position, inevitably faced a collision between the desire to keep its European ties in decent order and the complications of dealing with secondary sanctions.

Nonetheless, with an appropriately ingenious level of diplomatic squirming, there was every possibility of China coming out with its position strengthened. Mounting evidence of war crimes and killing of civilians by Russian forces in Ukraine had done nothing to stop Russia and China from taking their relations “to a higher level in a new era”.
Looking backward, this was the post-2014 template. A position of agonized neutrality after the Crimea annexation translated into greater Russian dependence on Beijing, and a Europe that still drew positive contrasts between Russia the disruptor, and China the stabilizer. Beijing could also have expected to see US energies sucked away from the Indo-Pacific to deal with a security crisis in Europe that extends well beyond Ukraine.
Since the war in Europe broke out, the EU and US have imposed severe economic sanctions on Russia as horror stories continue to flow out of Ukraine. And financial pain for the Kremlin is seen by Kyiv as the best way of stopping the war by peaceful means.

EU leaders are being urged to tell China it will face sanctions if it offers military aid to Russia for the war in Ukraine, amid concerns about a deepening authoritarian alliance that threatens the rules-based international order. Senior EU and Chinese leaders are expected to hold discussions on Friday at a video summit that is likely to be dominated by the war.

Chinese support for Russia must have consequences for EU-China relations

In the light of the events, two European politicians David McAllister (EPP, Germany), Chair of the Foreign Affairs Committee, and Hilde Vautmans (Renew Europe, Belgium), the European Parliament’s Standing Rapporteur on China for Brussels Morning gave their joint statements.
– “The EU-China Summit is taking place in unprecedented circumstances with a war on the European continent and following several turbulent years in EU-China relations. China’s ambiguous stance on the war in Ukraine is worrisome and the EU needs to assess it carefully and adopt a strategic response to China’s projection of power and influence. We recognize the strategic importance of the EU-China relationship. However, any Chinese support to Russia must have consequences for EU-China relations. The EU should therefore call on China to use its influence constructively and responsibly. It has been one year since China imposed sanctions on EU entities and individuals, including MEPs. The EU should insist that China lifts these unjustified sanctions. We stand in solidarity with Lithuania and call on EU leaders to reject resolutely the Chinese economic coercion against Lithuania. We also remain firm on the need to continue and strengthen the dialogue on human rights issues with China. In recent weeks, we have seen a geopolitical European Union rise up, firm and united in the defense of its fundamental values. We have seen that our unity truly is our strength. We wish to see this unity and determination maintained at the EU-China summit.” – was stated to the media.

Tags: Chinese support for Russia must have consequencesMain-SliderRussia's invasion of Ukraine was always going to leave China in a difficult spot.