Homecoming: Marina Abramović and Her Children. When the artist returns home 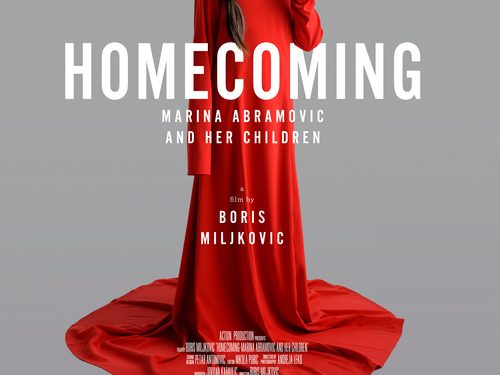 Rome (Brussels Morning – 2duerighe) “A famous artist returns home, after forty years of work, life and love abroad, after many successes, disappointments, triumphs and failures”. This brief but effective synopsis comes with the release of the documentary Homecoming: Marina Abramović and Her Children, recently shown in several international film festivals, including the Trieste Film Festival (21-30 January 2021).

The home is in Belgrade, Serbia, and its owner is the celebrated Serbian performance artist Marina Abramović.

The inspiration to make the film came to director Boris Miljković after watching Abramović’s latest performance, The Cleaner, exhibiting at the Museum of Contemporary Arts in Belgrade, which could be described as a vast retrospective of around one hundred works and re-performances.

The film picks up after one of the most controversial artists of our time returns home after her travelling exhibition relentlessly toured Denmark (Louisiana Museum of Modern Art), Germany (Bundeskunsthalle, Bonn) and Italy (Palazzo Strozzi, Florence). That homecoming, however, is not without logistical and emotional difficulties. It is both historic and symbolic, especially for Abramović, whose relationship with her country and family has always been in conflict.

Between myth and reality: the meaning of the artists’ legacy

Abramović is considered a living legend, and an undisputed icon of the artistic jet-set. Since her arrival in Belgrade followed by television cameras, however, she seemed to lose all her strength and charismatic authority, revealing the suffering and fragility of a painful and unforgettable past.

For those who have followed or studied Abramović’s work and life for years, Miljković’s recent documentary is part of the plethora of films dedicated to the artist. Marina Abramovic: The artist is present, a touching film shot in 2012 and dedicated to one of her latest, intense performances is just one, which may indeed seem repetitive and almost didactic in its mechanical accompaniment of Marina, step-by-step, throug the individual stages of her life.

Some may have seen the highly intimate and lauded autobiography Walk through walls: A memoir (Penguin, 2016). The latest documentary proves a faithful and authentic transposition of Marina’s stories. From the initial revealing and foreboding encounter with a snake, dreamt of by her pregnant mother to the fights she had with her parents — partisans of the Second World War — severe and absent and who instilled in Abramović a sense of duty and self-discipline. The artist’s journey back to Belgrade meanders through magical memories of her first performances and salient episodes in Tito’s former Federal Socialist Republic.

The strong, unrequited and disillusioned love affairs and the desire and refusal of maternity that was several times interrupted have almost morally obliged Abramović to carve out the role of “mother”, or as she prefers to define herself, “grandmother”, of performance art. Her peculiar pre-mortem legacy, which in The Cleaner, and especially in its Serbian edition, finds an emblematic closing of the circle, corresponds perfectly to the desire to form a new generation of performers, and consequently a new public.

This idea seems to thwart the historical etymology and ultimate meaning of performance, which is in itself a unique and irreproducible event in time and space. The need for the perpetuity of the artistic inheritance, the anguish of death and oblivion, but also the desire for continuous rebirth and transmission, led the artist to create the M.A.I. (Marina Abramović Institut) the only centre in which the art of performance is studied with a rare and precious “didactic” and subjective methodology.

When her latest works seem to be lost and shipwrecked in the sea of incomprehension — such as The Seven Deaths of Maria Callas and the latest controversial video The Life for London’s Serpentine Gallery, for which she has even been accused of shamanism — the question remains, as James Westcott asked in When Marina Abramović Dies (The Mit Press, 2010): who will take on her heavy legacy? The answer is perhaps to be found in the collective embrace that symbolically closes Homecoming: Marina Abramović and Her Children, which reconnects the artist to her past, with an encouraging glance towards the future.