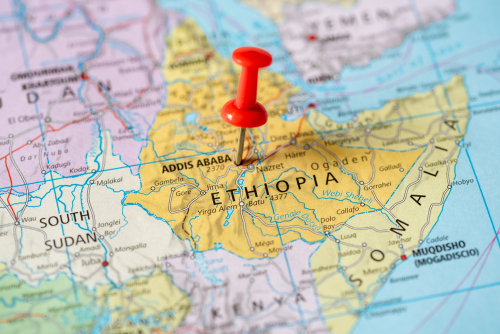 Push pin on the territory of Ethiopia on the world map

As part of the agreement, Tigrayan rebels announced earlier this week they were continuing to disarm and handing in heavy weapons, according to France24 reporting on Thursday.

German Minister of Foreign Affairs Annalena Baerbock and her French counterpart Catherine Colonna will stay in Ethiopia two days and return on Friday.

During their stay, they are to attend meetings with Ethiopian Prime Minister Abiy Ahmed, other high-ranking government officials, representatives of the African Union and human rights campaigners as well as visit a World Food Programme distribution centre.

Colonna noted in a statement before the visit that it is aimed at “supporting the peace process, the fight against impunity and reconstruction.”

According to a diplomatic source, the two EU foreign ministers will inform Addis Ababa that the bloc is prepared to re-engage in Ethiopia if both sides continue to respect the peace agreement and the country puts in place a transitional justice mechanism.

The Tigray War broke out in November 2020 and ended in November last year, with tens of thousands of civilians killed, more than 2 million displaced and millions in need of humanitarian assistance.

Since the peace agreement was signed, some humanitarian aid deliveries to Tigray resumed, providing the region with much-needed food, medicines, fuel and cash.

As some aid deliveries have resumed, the region is rebuilding infrastructure and restoring basic services including power, communications and banking.

While rebels say they are disarming, some aid workers and residents warn that Eritrean troops and those from the neighbouring Amhara region are still in parts of Tigray, accusing them of looting, rape and murder.

The situation has not been verified independently as it is very difficult to access the region.

According to the peace agreement, the disarmament is to take place simultaneously with the withdrawal of foreign forces and those that are not part of the Ethiopian National Defence Force.

The EU is increasingly focusing on cooperation with African countries, especially in the Horn of Africa, in response to China’s expansion of influence there. Earlier this week, the Chinese Minister of Foreign Affairs Qin Gang visited Addis Ababa.