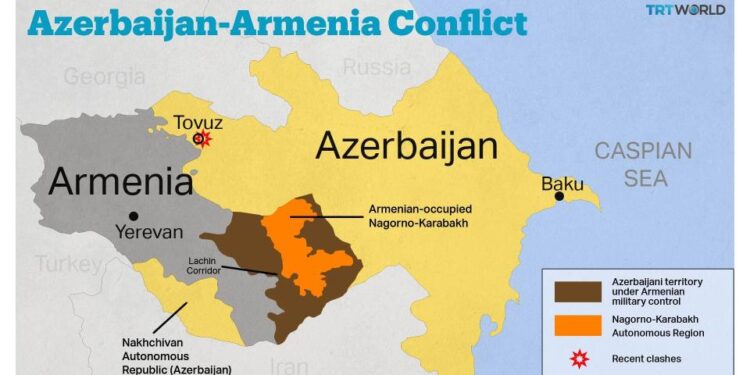 Belgium, (Brussels Morning Newspaper) The fears that wars and conflicts will dominate world politics seems that never stop even. While international attention is occupied by Russian violations in and of Ukraine, there is a conflict taking place between Armenia and Azerbaijan, less than 1,500 km away. This article explores international responses to Azerbaijan’s human rights violations against Armenia against the backdrop of Speaker of the US House of Representatives Nancy Pelosi’s September 2022 visit to Armenia. It discusses the geopolitical factors that will complicate any cohesive call to hold Azerbaijan accountable.

Since September 2020, the situation in the South Caucasus has been unstable due to an escalation of conflict between Armenia and Azerbaijan. This conflict dates to the pre-Soviet era (1917), when the three ethnic republics of Transcaucasia—Armenia, Azerbaijan, and Georgia—were established after the collapse of the Russian Empire. In 2020, a ceasefire agreement was signed by Armenia, Azerbaijan, and Russia following the 44-day war that broke the 1994 ceasefire. As a result, the borders of the two hostile countries underwent significant change.

Recently a senior U.N. official urged the international community to prevent Armenia and Azerbaijan from resuming their conflict over the disputed Nagorno-Karabakh region as the two countries accused each other of violating a Russian-brokered peace agreement.

U.N. Assistant Secretary-General for political affairs Miroslav Jenča said a renewed conflict would likely impact the wider south Caucasus region and beyond. He urged redoubled diplomatic efforts to achieve a lasting peaceful settlement between Armenia and Azerbaijan “before it is too late.”

In recent days, he said, both Armenia and Azerbaijan have written to U.N. Secretary-General Antonio Guterres and to the Security Council offering widely differing accounts of the situation, alleging violations of commitments by the other side, and challenging each other’s claims.

On this important topic for Brussels Morning speaks the Member of the European Parliament Fabio Massimo Castaldo and claims that In Nagorno-Karabach, the guns are currently silent but yet, the war is far from being over.

” Indeed, after the previous criminal attack on Armenia, we are now seeing one of the worst sides of the war. The hateful blockade of the Lachin corridor for 38 days by the fake Azeri eco-activists is putting the lives of thousands of children, women, and fragile persons at risk, not due to bombings or gunshots, but to starvation and hindered access to medicines. We must seriously step up our efforts for stopping these atrocities. First, our monitoring mission should have the mandate to enter the Lachin corridor immediately for verifying what is happening on the ground. Yerevan has already granted access to its territories, and we demand Baku do the same without any further delay. Then, we must be proactive in ensuring that the affected population receives necessary humanitarian supplies, and organizing immediate lifts to the region. If the Baku regimes deny access, we have to stand ready for adopting a set of adequate, strong sanctions targeting those responsible for these atrocities ” stated the MEP.

He said that in this context any attempt to undermine access to food amounts to a war crime.

“We have loudly denounced that in Ukraine, and we must reaffirm it in the same way in Nagorno-Karabach. When the lives of people are at risk, there is no space, not a single inch, for double standards” told the newspaper Massimo Castaldo.