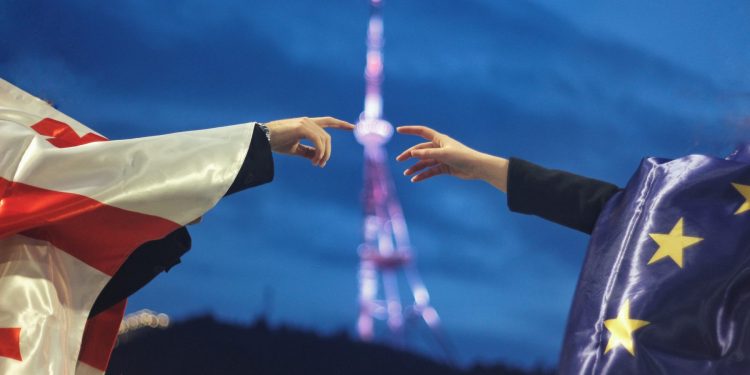 Brussels (Brussels Morning) Political parties in Georgia have signed an agreement mediated by the EU to end the political crisis that has been gripping the country for months, RFI reported on Tuesday.

The crisis, which dates back to October last year, broke out when opposition parties denounced parliamentary election as rigged. It raised concerns among Western countries that Georgia was backsliding on its democratic commitments.

All the country’s political parties signed the anti-crisis agreement that was proposed by European Council President Charles Michel on Monday, ending the opposition’s parliamentary boycott and opening doors to judicial and electoral reforms.

Salome Samadashvili, MP for the United National Movement (ENM) opposition party, stated that his party would join the deal once its detained chairman Nika Melia “is released from prison as stipulated in the agreement.\”.

“This agreement is the starting point for your work towards consolidating Georgia’s democracy and taking Georgia forward on its Euro-Atlantic future”, Michel pronounced, describing the deal as “a truly European way of resolving the crisis”.

He also announced talks with Georgian politicians on joint steps to strengthen the ties between the EU and aspiring member Georgia.

Start of the crisis

After the October elections, opposition MPs refused to attend sessions of the parliament and organized protests.

The crisis escalated in February with the arrest of ENM head Melia in a raid on ENM headquarters, a move condemned by the West, after which former Prime Minister Giorgi Gakharia stepped down.

According to the EU-mediated deal, opposition parties are to end their parliamentary boycott and the ruling Georgian Dream is to address “perceived politicised justice” within a week.

This includes the case of Melia, who was accused of organising violence at the 2019 anti-government protests, a charge he claims is politically motivated.

Additionally, Georgia is to call early parliamentary elections next year if the ruling party wins less than 43% of the vote in coming local elections.

The government is also to implement electoral and judicial reforms as well as a new power-sharing system, according to which opposition MPs will head five parliamentary committees.

The ENM has called for protests on 15 May unless Melia is released from prison. ENM MP Akaki Minashvili maintains that “ending the crisis would require addressing fundamental problems” of Georgia’s democracy. Otherwise, he concluded, “such an unstable political system will continue producing political crises in future”.