Putin May Still Have an Ace in the Hole 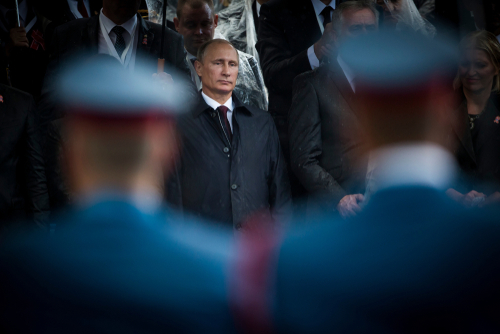 Belgrade, Serbia - October 16, 2014: Russian President seen through the soldiers during the military parade March of the victorious in Belgrade. President Vladimir Putin of Russia arrived in Belgrade

The USA, (Brussels Morning Newspaper)The war in Ukraine has now dragged for almost eight months and does not seem likely to end anytime soon. Russia’s President Vladimir Putin may have believed that Russia’s military would make quick work of Ukrainian forces and take over much of the country in a matter of days, but the Ukrainian military, with ample support from the west, put that Putinist fantasy to rest shortly after the war started.

For several months now, understanding the war in Ukraine and how it might develop in the coming months has relied on holding two somewhat disparate thoughts in one’s head at the same time. First, Russia’s military has been humiliated. This was supposed to be a modern army with advanced weapons, logistics and leadership, but they have been battered by a Ukrainian military with strong support from the west. Russia’s military simply could not deliver the quick victory that Putin promised, but that is only part of the story. Equipment being abandoned, poorly trained troops, battlefield defeats, bad planning and insufficient logistical work have all characterized Russia’s military in this war.

One fact stands out and captures how badly the Russian military been outmatched in recent months. More than 61,000 Russian troops have died in this conflict. That is an enormous amount of deaths for a modern army in only a few months. In comparison, roughly 58,000 American troops died fighting in Vietnam. In other words, more Russian troops have died in this war that is only eight months old than American troops died in well over an entire decade of the US war in Vietnam.

The second point that must be kept in mind is that despite, or perhaps in response to, the humiliation of the Russian military, Russia could still win this war. As the casualties and humiliations pile up, Russia continues, and even escalates its war on Ukraine. This was starkly evident October 10th when Russia bombarded several Ukrainian cities causing more death and destruction among the civilian population of Ukraine. Additionally, the difficulties Russia continues to encounter as it seeks to call up more troops and the possibility, although not likelihood of political instability in Russia are obstacles for Moscow, but they are very far from insurmountable. Together, these two points mean that the outcome of this war is still uncertain.

It may seem, at first glance, that Russia is ill-prepared for a long war in Ukraine that will be the inevitable result of these two seemingly contradictory circumstances. Sustaining casualties at the current rate will be painful for the Russian people. Ongoing economic isolation, if it holds, will continue to damage the Russian economy, while defeats on the battlefield will dampen enthusiasm for the war among some in Russia leading others to questions Putin’s ability to lead. All of that is true, but it is also the case that Putin may have one more ace to play-one that has little to do with battlefield conditions or morale in Russia.

One critical and frequently overlooked way that the direction of the war can change in Putin’s favor is if his longstanding efforts to destabilize the US are bolstered in the midterm elections. The return of Republican majorities, led by the GOP’s pro-Trump MAGA faction, will introduce more chaos into the American political system, while making it very difficult for the Biden administration to continue its pro-Kyiv posture. Even if the Republicans control one house of congress, they can slow down assistance to Ukraine while harassing the Biden administration with an endless stream of pointless investigations that will take valuable time from the President and the people around him. This is not speculation. The Republican Party has made it clear this is what intends to do if it gets back in power in the midterm elections.

The Republican Party is also divided, with a hawkish wing that supports Ukraine and a more MAGA wing that does not. When congressional Republicans are in the minority, this division is not very significant, but as they gain power, it will become more important. Given how the MAGA wing of the party has continues to become more influential in the GOP, it is likely that resistance to supporting Ukraine will also become stronger in a Republican congress. Whatever a Republican controlled congress does that ends up helping Putin and Russia will be minor compared to what a return of Donald Trump to the White House, something that cannot be ruled out, would do for Russia.

The lines between domestic and international affairs have never been blurrier than they are now. Nowhere is this clearer than in the complex and increasingly hostile relations between the US, Ukraine and Russia. As the world watched the battles in Ukraine, we should not overlook the enormous impact electoral battles in American states like Georgia, Wisconsin, Pennsylvania and Ohio next month and in 2024 will have on the future of Ukraine.