EU close to compromise on Kaliningrad 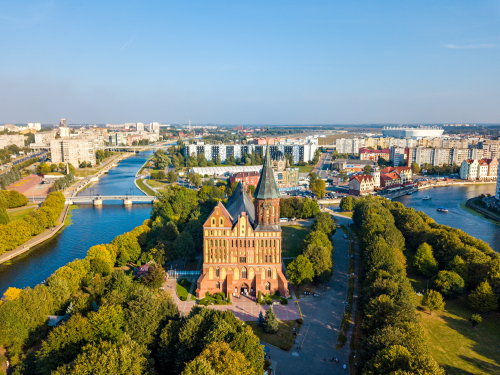 Russia, Kaliningrad - September 20, 2018: Aerial view The central part of the city of Kaliningrad, the Kaliningrad Cathedral on the island of Kant. Russia

Belgium, (Brussels Morning Newspaper) The EU is close to reaching a compromise on trade to Kaliningrad and an agreement should be reached in the coming days, according to two sources.

Freight transport to the Russian exclave has been restricted due to EU sanctions imposed on Moscow and EU officials are nearing compromise with Lithuania to defuse tensions with Russia, according to Reuters reporting on Thursday.

Kaliningrad relies on freight transport through Lithuania for many goods and has been cut off from mainland Russia since mid-June.

The two sources pointed out that the exclave could be exempt from sanctions if Lithuania agrees to the proposal.

The issue of Kaliningrad is testing the EU’s determination to enforce sanctions against Russia over its aggression against Ukraine and giving rise to fears of escalation.

One of the sources noted that Germany supports the idea of finding a solution for Kaliningrad. The source pointed out that Lithuania fears Russia could use force to resolve the issue and create a land corridor through the country to reach the exclave.

Germany has troops in Lithuania as part of NATO deployment there and wants to avoid escalation of the confrontation with Russia, its main energy supplier.

“We have to face reality,” one of the sources stressed and pointed out that Kaliningrad was “sacred” to Moscow.

The source noted that Russian President Vladimir Putin “has much more leverage than we have… it’s in our interest to find a compromise,” adding that the solution may appear unfair.

Lithuanian officials confirmed that they will continue talks with the European Commission and stressed that any changes to application of sanctions should not single out Lithuania.

“Sanctions must be enforced, and any decisions taken should not undermine the credibility and effectiveness of EU sanctions policy,” a Lithuanian Foreign Ministry spokesperson stated.

The spokesperson pointed out that transit to Kaliningrad “is possible through various EU member states” and concluded that the EC’s plan on implementation of sanctions “cannot be limited to Lithuania.”

The Commission commented on the situation on 22 June, pointing out that application of sanctions does not hinder supply of essential goods to the exclave.

One of the sources predicted that a compromise would be reached by 10 July and the other expects a solution to be announced next week.