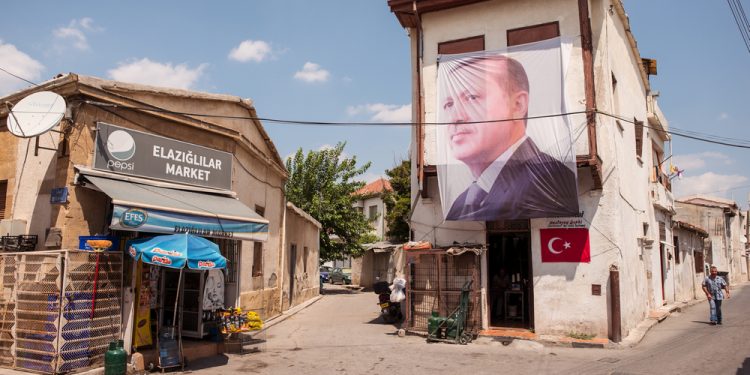 Nicosia / Northern Cyprus - August 15, 2019: portrait of Turkish President Erdogan hanging on a building in the part of Nicosia belonging to North Cyprus

Brussels (Brussels Morning)The European Parliament  has condemned Turkey’s opening of Varosha, the beachfront resort area sealed off since the Turkish invasion of northern Cyprus in 1974.

Last month, in contravention of the United Nations resolutions pertaining to the situation on the divided island, the fenced off area next to the historic town of Famagusta was declared partially re-opened by Ankara in conjunction with the Turkish Cypriot authorities in north Cyprus.

In a heated debate in the Brussels plenary Tuesday, the Parliament registered its concern that the unilateral and unauthorised move had altered the situation on the ground in defiance of UN Security Council resolutions.

MEPs demanded that Turkey reverse its action and return to talks under UN auspices in order to avoid further escalation of tensions that reached new heights following the visit to Varosha ten days ago by Turkey’s President  Erdoğan.

Members of the European Parliament cited the divisive election of Ersin Tatar as the new Turkish Cypriot leader a few weeks ago and his stated opposition to the comprehensive settlement of the Cyprus problem which calls for a bi-zonal, bi-communal federation as set out by the UN.

The great concern is that Turkey’s push for a two-state solution and claims to the offshore energy reserves would mean a permanent partition of Cyprus in violation of the UN Security Council resolutions.

We are deeply concerned by these developments,” Borrell stated in the course of the Brussels plenary on Tuesday. ”We call for an immediate reversal of action”, he said, noting that Erdogan’s Varosha visit came at a sensitive time when the UN is doing its utmost to bring about a resumption of the Cyprus settlement talks.

”The EU holds Turkey responsible for this situation; Varosha and Famagusta will remain on the EU’s agenda. The EU remains fully committed to a Cypriot reunification in line with EU principles”, he declared.

Last week, Borrell issued a statement saying talks on reunification based on a bi-zonal, bi-communal federation with political equality should resume swiftly, while saying there is no alternative to a comprehensive settlement.

While Borrell wishes for Turkey to reverse the opening of the fenced-off area, MEPs worry about  Ankara’s  aims for the area.

”In yet another debate on Turkey, the government makes it easy for us to condemn Turkey’s actions as a flagrant breach of international law. 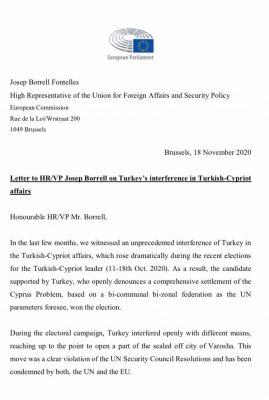 There cannot be a two-state solution, that would be extremely dangerous and the EU has to support a solution,” Nacho Sánchez Amor, from the Socialists, stated..

MEPs wished for more decisive action from the EU, including a freeze on EU aid and the customs union.

”Turkey scandalously and illegally occupies half of the island and now Erdogan wants a partition of the island. The EU still gives him billions of euros, while he supports terrorists and extremists in Libya and Syria.

We need to sanction Turkey, put an end to Turkey’s accession status with the EU and end their membership with NATO and the Council of Europe,” Nicolas Bay, of the French Rassemblement national, opined.

Charlie Weimers, Conservative ECR group, expressed his disappointment at the lack of action from the EU’s foreign policy actors: ”It is toothless to keep issuing resolutions, while we need more sanctions, but that would be too ’tough’ for the other Conservatives and the Liberals,” he said.

”When are we going to take measures against Erdogan? We should suspend the customs union with Turkey for six months to stop Erdogan from these neo-Ottoman efforts.”

David McAlister, Conservatives EPP, wanted Turkey to refrain from unilateral provocations. ”What Turkey is doing is not acceptable,” he said. ”Turkey pursues illegal drillings in Cypriot Greek waters and the escalation in Libya and Nagorno Karakbah is due to Turkish influence. This is one further destabilising action.”

The European Parliament supports a settlement for Cyprus that would build on a federation of two communities in two zones, but with single sovereignty and with political equality between the communities.

”Varosha should be returned to its rightful inhabitants under the aegis of the UN,” said Costas Mavrides of the Cypriot Socialists, but he questioned whether the resolution would send Turkey a clear message.

”The UN has called for that for decades, the withdrawal of the occupying troops would allow EU law to be extended across the island. There is no point in continuing with failed policies,” he said.

Speaking for the Conservatives’ EPP group, Arnaud Danjean denounced Turkey’s actions as acts of aggression and called for further sanctions. ”President Erdogan provokes the EU and its member states and brings on conflict, from Libya to Armenia.

When an EU country sees its sovereignty attacked, it is a provocation. Turkey is a great neighbour but we have to be clear and see that Erdogan intends to go beyond the nationalist provocations. This is an aggression.”

Antionio López-Istúriz of the Conservatives EPP claimed Josep Borrell should step up and take action. ”We all agree that these are open attacks on two EU member states,” he said.

As High Representative for the EU’s Security Policy, Borrell comments were  measured.

”We are engaging on the diplomatic level and EU leaders will have to take decisions,” he  said. ”We have to reach out to Turkey before taking further decisions. But we are at a critical moment.”

Last week, MEPs from the Left and the Socialists, among them Dimitrios Papadimoulis (GUE/NGL) and Martin Schirdewan (GUE/NGL), urged Borrell to take steps to ensure that Turkey respected the UN Security Council resolutions regarding the return of Varosha and calling on Turkey not to interfere in the internal affairs of the Turkish-Cypriot community .