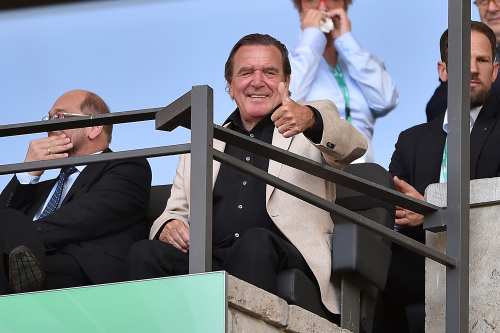 Belgium (Brussels Morning Newspaper) The four largest political groups in the European Parliament have prepared a draft resolution which would call on the European Commission to place former German Chancellor Gerhard Schröder on the list of persons sanctioned over Russian invasion of Ukraine.

Schröder, a Social Democrat who encouraged closer economic ties between Russia and Germany during his two terms in power, between 1998 and 2005. After pushing for new gas pipelines as Chancellor, Schröder left politics and soon took up executive jobs at Russian energy companies, starting with Nord Stream in 2005 and later becoming chairman of the board of Rosneft. He is currently preparing to take a top job at Russia’s state-controlled energy giant Gazprom.

Before the start of the invasion, Schröder openly criticised Germany’s policy towards Russia and its President, Vladimir Putin, condemning what he said was “sabre rattling” coming from the western countries. As the invasion began, Schröder blamed both sides for “making mistakes” and said that use of military means was unjustified, but stopped short of resigning from his well-paid Russian jobs.

Unlike Schröder, several other former heads of government resigned soon after the full scale invasion began, such as former Austrian Chancellor Christian Kern, who left his position at the board of state-owned railway operator RZD. Former Italian Prime Minister Matteo Renzi also resigned from the board of Russian Delimobil, while former Finnish Prime Minister Esko Aho left his job at Sberbank.

In the draft resolution presented on Thursday, the EP would urge “to extend the list of individuals targeted by EU sanctions to the European members of the boards of major Russian companies and to politicians who continue to receive Russian money.”

The resolution notes that several former politicians have already resigned from their positions, and “strongly demands that others, such as Karin Kneissl and Gerhard Schröder, do the same.” Kneissl is a former Austrian Foreign Minister who received international fame after inviting Putin to her wedding in Gamlitz, where the two were photographed dancing during the festivities. Kneissl is currently sitting on the board of directors of Rosneft.
EPP lawmaker Markus Feber, one of the authors of the resolution, told Reuters that the document was an invitation for Schröder not to take the Gazprom job, as the gas giant is preparing to formalise its new board on Friday. “By serving in top positions of Kremlin-affiliated corporations, the former German Chancellor Gerhard Schroeder is de facto closely cooperating with Russia,” warned Feber.