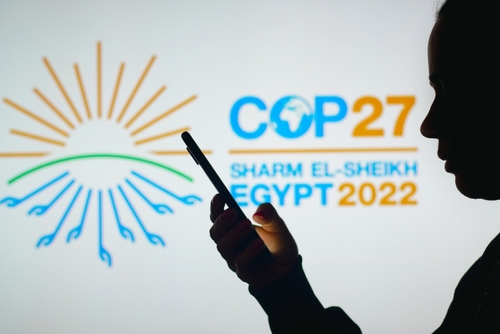 Belgium, (Brussels Morning) The EU and the US have been criticized by environmental NGOs over a methane joint declaration that “introduces nothing new”. Announced today at COP27 in Sharm El Sheikh, Egypt, the joint pledge is meant to reduce greenhouse gases, particularly methane emissions, from the main oil and fossil gas importing and exporting countries.

“While the intention looks laudable on paper, the declaration is a toothless tool in practice,” stated CAN Europe, Food & Water Action Europe and Deutsche Umwelthilfe (DUH), pointing out that the lack of legally binding effects entirely discredits the declaration.

Methane is the second-most important greenhouse gas after CO2 and is responsible for a quarter of current global warming. This greenhouse gas is exceptionally potent with around 80 times the warming potential of carbon dioxide over a 20-year span, though methane remains in the atmosphere for a shorter amount of time.

Moreover, the green NGOs argue that the EU is not taking any further commitments beyond what is already included in the Methane Regulation Proposal, which is under discussion by the European Parliament and Council.

Tabled in December 2021, the European Commission’s proposal on methane includes reporting obligations for importers into the EU. It also attempts to tackle the European fossil industry, with a ban on routine venting and flaring and leak detection and repairs.

“Between 75-90% of the methane emissions caused by the EU fossil fuel consumption occur in the supply chain. This joint declaration cannot be an excuse to refrain from effectively addressing those emissions in the Methane Regulation,” the NGOs added.

While criticizing the lack of real commitment by the larger emitters, CAN Europe maintain that it is legally possible to extend the scope of the Methane Regulation to operators outside the EU that export fossil fuels entering the EU market.

In a study commissioned by CAN Europe, policymakers are encouraged to apply the EU domestic provisions on Measurement, Reporting and Verification (MRV), Leak Detection and Repair (LDAR) and Limits on Routine Venting and Flaring (LRVF) to all energy imports. The study also notes the importance of requiring importers to only source oil and gas from countries and companies meeting those standards.

“Against the current attempts of some Member States in the Council to water down the Methane Regulation proposal, the European Parliament must include strong measures on energy imports to incentivize changes also at the international level,” stated the NGOs.

A new satellite-based system to detect methane emissions — Methane Alert and Response System (MARS) was also announced today at the COP27, intended to assess emissions in real-time and communicate it to governments and business around the world.

The Global Methane Pledge was first announced by the EU and the US in September, 2021, two months before the COP26 in Glasgow. The US and the EU jointly promised to reduce their methane emissions 30% from 2020 levels by 2030, and at least 35 more countries signed on in the weeks that followed.

In the early days of the COP26 in 2021, more than 100 countries — representing around 70% of the global economy — had signed the pledge. That tally has now grown to 130, according to the Global Methane Pledge website.

Despite a global commitment to work towards reducing methane emissions, the environmental NGOs insist that the non-binding declaration is not ambitious enough to effectively cut emissions from the fossil fuels supply chain and slow down the climate catastrophe in the short term.

“In the long term, the only answer to the climate crisis is to phase out fossil fuels including fossil gas by 2035 and embark on a transition to 100% renewable energy,” reads the joint statement.