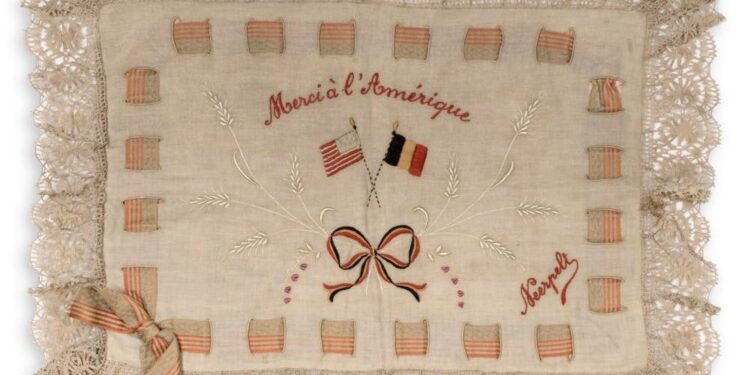 Belgium, (Brussels Morning Newspaper) In early 1914, the United States and Belgium had a common denominator. Both officially declared neutrality as the world began to draw alliances in that gathering nightmare known as World War 1. The United States formally proclaimed a policy of neutrality despite President Woodrow Wilson’s growing antipathy towards the German Empire.

Belgium on the other hand was “neutral” on paper only. Its neutrality had been formally guaranteed by The Treaty of London in 1839. Germany however ignored the document— referring to the declaration as a “mere scape of paper” — and by August 1914, had occupied “neutral” Belgium. The civilian population of Belgians suffered as the German army engaged in numerous atrocities: imprisonment, forced labor, wholesale executions, deportations, and starvation tactics, (more about that later…).

The war crimes committed at Dinant, Andenne, and Liege began to be acknowledged in the world press. One incident, in particular, got the attention of President Wilson. In August German forces ravaged the university city of Leuven, indiscriminately murdering hundreds and deliberately burning books, manuscripts, and over 800 irreplaceable, Medieval ancient texts. American journalists, intellectuals, and ordinary citizens, already dismayed by German aggression, saw this new level of cultural destruction as especially odious. President Wilson began to reexamine neutrality. The chorus of American outrage began to take action…

In addition to the aforementioned atrocities, Belgium began to suffer acute food shortages. Even under normal circumstances, urbanized Belgium only grew 20-25% of its food needs. What food was available was quickly requisitioned by the German army. The demoralized civilian population faced imminent starvation unless food could be brought it end-masse. With the growing chorus of anti-German sentiment, a massive American-sponsored Belgium food relief effort began.


The coordinating task was given to an organization named: The Committee for Relief in Belgium (acronym; C.R.B.). It was administered by an American financier named Herbert Hoover (more about him later). Working past a German economic blockade (replete with submarine warfare) American relief workers were covertly able to ship 4 billion kilos of food and distribute it effectively to 11 million Belgium civilians. Included in this effort were 350 tons of flour packaged in cotton sacks.

It is important to note that cotton cloth was in demand and greatly coveted by the Germans during wartime—it was used for uniforms, bandages, and the manufacture of ammunition. To keep the “contraband” cotton out of German hands, the C.R.B distributed the empty sacks to professional trade schools, sewing workshops, convents, and individual artists. Belgian seamstresses, already worldwide famous for their lace and exquisite embroideries, created masterpieces out of these “sacks of flour”.

Thousands of skilled craftswomen transformed these ordinary throw ways into many functional items like clothing (much needed!), pillows, rag-doll toys, quilts, blankets, etc. but many took the task to an entirely new artistic level. New designs—painted, embroidered, embellished lace, stenciled onto the sacks became a very Belgian-specific art form—often with a symbolic message. Many themes expressed messages of gratitude to America, proudly the Belgian and American flags side-by-side, the Belgian coat-of-arms lion, the iconic American eagle, and symbols of peace, strength, and courage.

Flour sacks developed into a win-win situation as some of these cultural artifacts were distributed to shops in England, Canada, and the United States. They helped raise much-needed funds for the war effort—specifically to aid the prisoners of war. Coincidentally Herbert Hoover, the private citizen who organized the C.R.B., would be elected as the 31st. President of the United States in 1929. He would often credit much of his popularity to his work with the Belgian relief effort. He always coveted the works of those Belgian seamstresses. Years later after his term as President, several hundred of the most iconic flour sacks were donated to the Herbert Hoover Presidential Library and Museum where they remain today.

Perhaps American best-selling author, poet, and philosopher Amy Collette once said: “Charity, gratitude, and appreciation are very powerful catalysts. They can be a spark that lights a fire of joy in our creative soul”. Insightful words to be sure and to think that in this instance, it started with a sack of flour!