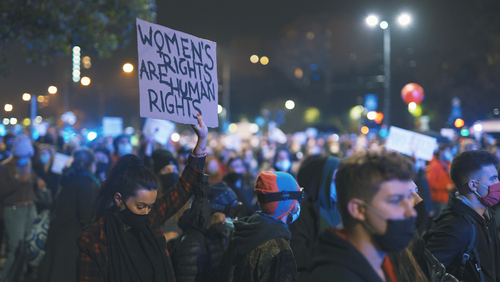 Belgium, (Brussels Morning Newspaper) A fierce backlash against gender equality, and in particular sexual and reproductive health rights, is currently terrorising our continent. Recent developments show that the newly adopted law in Poland is just the tip of the iceberg, putting the rights of the almost 229 million women and girls in the EU under extreme pressure. Only last week, the European Parliament debated this backlash against gender equality, and we liberals called on the EU institutions and governments to develop a targeted strategy and to co-sign the Simone Veil Pact for more women’s rights.

Today several Member States prohibit abortion except in strictly defined circumstances, making it practically impossible to access legal and safe abortions. This puts the lives of many women at risk since it forces them to have clandestine abortions or to carry their pregnancy to term against their will. Contrary to what pro-life activists and policymakers might wish to believe, the number of abortions did not go down as a result of these actions. In addition, other important aspects of sexual and reproductive health and rights are continuously under pressure like access to contraception, sex education, obstetric care, and access to medical assistance. Moreover, the COVID-19 pandemic has only made the situation worse, placing a higher burden on medical staff and social workers, while leading to longer waiting times and the cancellation of much-needed (in person) consultations.

It is clear that the erosion of fundamental rights is part of a broader, ultra-conservative, and far-right agenda, first targeting women, then LGBTIQ+ persons, migrants, and other minorities. These movements are strongly linked to the erosion of the rule of law. Just look at the decision of the unconstitutional tribunal in Poland that restricted access to abortion. Unfortunately, these ultra-conservative campaigns are very well-funded, both internally and externally. Moreover, recent developments in Poland are just the tip of the iceberg: similar bills have been discussed in the other Member States, such as Croatia and Lithuania.

However, even in countries with better access to legal abortion, pregnant women also face numerous restrictions and barriers to accessing these services. We are talking about mandatory and long waiting times and high costs, which exclude a large part of society. Medical professionals give biased advice or else “pro-life” organisations that pretend to protect the best interests of pregnant women do so instead. We see anti-abortion campaigns everywhere, including in the Paris subway, while at the same time these illiberal and conservative forces manage to collect money from wealthy and aristocratic families in the EU.

That is why dear Europe, we really need to talk about our women’s rights. We, liberals, believe that a targeted strategy is needed to stop the spread of this ideology and to stop the erosion of women’s rights. We need to understand and counter anti-gender movements. We must establish partnerships with civil society organisations that are also adequately funded. Raising awareness and informing the population and policymakers remain, of course, essential. It is only by “putting the finger on the wound” that we can start the process of change. However, at the EU level, we also bear an important responsibility. We have to continue monitoring the situation in Europe, enforcing the rights of women, and suspending funds where and when necessary. Otherwise, we will never be able to turn the tide.

It is in this context that we have launched the Simone Veil Pact in order to establish our clear commitment to women’s rights and gender equality in general. With this document, we set out the clear and concrete principles we commit ourselves to. These range from sexual and reproductive rights, the right to family life, the fight against gender-based violence, the need for equality in the workplace, and, last but not least, political representation. All our rights and freedoms that remain under great pressure today, no matter where a woman or girl may live in Europe. No single country can say it scores 100% since clear challenges remain.

In order to ensure these fundamental principles, we commit ourselves to a number of concrete action points. It goes without saying that we must empower women directly and challenge the persistent stereotypes that refuse to go away. This starts at home and in schools, but we as public figures must also show the way. Moreover, we want the European Commission to identify, promote and/or propose best practices and legislation at the EU level in order to counter the current backlash. This is not about reinventing the wheel. It is about expanding the good and getting rid of the bad practices and policies.

As a logical follow-up, we want the EU Member States to adopt those best practices and relevant legislation. It is vital that governments are vigilant and pay close attention if we are to ensure that these rules are applied and respected in practice generally but notably by medical staff and social workers. The European Parliament will monitor both the legal and factual situation in all Member States.

Finally, we demand that the Council and the Heads of Government make gender equality a true European priority since only a strong European agenda and action plan will enable us to stop the current downward spiral. I therefore would like to echo this message of last week anew and urge all EU institutions and governments to co-sign this Pact and act.