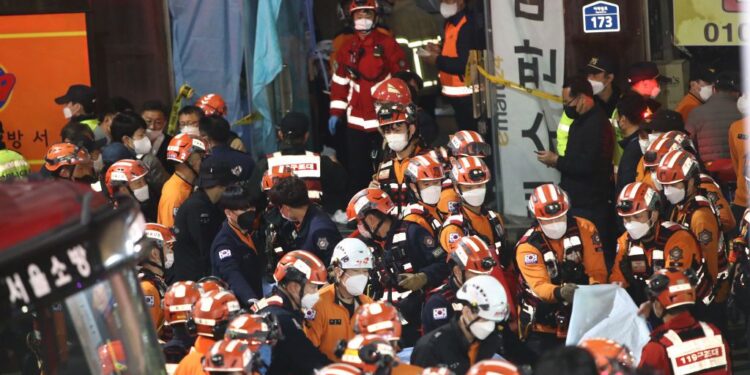 Brussels, (Brussels Morning Newspaper) – More than 150 people were killed in what is called a “crowd crush” in the Itaewon district of Seoul. Safety at major events is a shared responsibility of public safety personnel and event organisers, according to experts in crowd management. There are, however, measures you may do after a dangerous crowd scenario has developed to lessen your risk and increase your chances of survival. Travellers are inspired to visit a new place because of a festival or concert that will be held there. On the other hand, a throng might quickly turn into a dangerous stampede. Let’s talk about the difference between Crowd Crush vs Stampede.

What is the Difference between Crowd Crush vs Stampede?

The terms “crush” and “stampede” are not interchangeable in this context. According to the reports, what occurred in Germany did not include a stampede. “A stampede occurs when a group of people or animals rush in the opposite direction of an apparent threat. They are trying to get away from anything that makes them feel threatened. This was a mass hysteria… a movement of people towards something that they saw as having worth. Similar to the process of entering the location.”

The most significant event occurred in the Love Parade. In the Love Parade, it underestimated the magnitude of the gathering. The organisers had anticipated a turnout of 250,000 people, but the actual number was closer to 1.4 million. As a result, security, medical services, and infrastructure were severely insufficient.

“There is always this preconceived notion that more people would still be alive today if only they had behaved sensibly and not been crushed to death. It wasn’t panic that caused this; rather, it was a failure to handle the event, “explained reports properly.

Several people are said to have passed out in the chaos caused by the big throng. According to several other sources, the panic was caused by electrocution. Whatever the reason for the unexpected influx of people, only a single, modest suspension bridge could accommodate them.

Why do these things keep occurring?

Crowds are harmful and it’s hard to picture how precisely they cause harm. In the right circumstances, a large enough crowd can even bend steel. While no two tragedies are the same, this video presents the official conclusions drawn from the Love Parade crash that resulted in the deaths of 21 people and many more injuries.

Scary. How can you prevent problems like this from occurring when planning an event? What do you, a human who wishes to remain alive and well, stand to gain if you succeed?

How to keep your events safe from stampedes and crowd crushes?

To manage a crowd, it’s better to be safe than sorry. In most cases, the crowd’s panic builds gradually, and there are several checkpoints you may put in place to prevent it from becoming out of hand. You can assist in guaranteeing your event’s safety by ensuring all exits are properly labelled, all participants have been briefed on emergency protocols, and all occupancy limits are strictly enforced.

How to Stay Safe in an Emergency

Research says  to take your time to record all the exits mentally.” People tend to always depart by the same door, not because it is the safest option, but simply because it is the most familiar. He also mentions the possibility of a less-trafficked exit that may get you out of the building faster if you know where it is.

“If you start to feel uneasy amid a large group of people, it may be time to consider leaving. This is challenging since you may not want to leave after traveling a great distance or waiting for a long period, say, in front of a stage.”

Many folks put off making that choice until they’re already engulfed in the crowds of people swaying and shuffled about by the crowd’s movement. Paul says he has found that, in general, audiences are not panicky but rather heroic and kind.

Though the alternatives available to those caught in a crowd crush or stampede may have varied, experts agree that the small alleys and high population density likely left few choices. In most cases, it’s safer to hang back from the front or centre of the throng and go toward the edges. At concerts, anybody standing too close to the stage or the barricades may be crushed if the throng rushes. The people in the centre may feel pressure from the front and the rear.