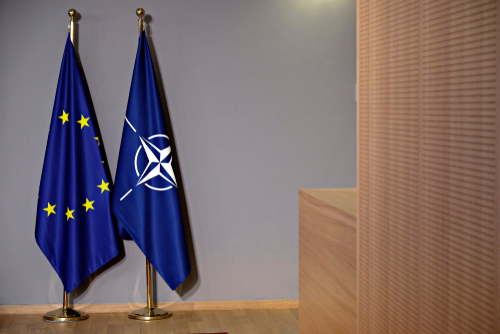 Flag of European Union and flag of NATO in European Councils Building on May 18, 2017

Belgium (Brussels Morning Newspaper) Croatian President Zoran Milanović stated on Tuesday that he plans to veto Finnish NATO bid at the alliance summit in Madrid in late May, demanding urgent resolution to the “issue of Bosnia and Herzegovina”.

In Croatia, presidents hold a largely ceremonial role without significant input into day-to-day politics, though they are considered to be supreme commanders of the armed forces, and share some of the foreign policy duties with the government.

“I will, as a president who represents Croatia, veto the invitation to Finland at the NATO summit, if it will be held at that level,” Milanović told journalists during his visit to Vukovar on Tuesday. He conceded that he could probably not force the Croatian ambassador to NATO to make the same decision, if the summit will be held at an ambassadorial level.

A former Social Democrat (SDP) Prime Minister, Milanović stated his objection to NATO expansion in recent days as a means to put pressure on the international community to reform the Bosnia and Herzegovina electoral laws so they would provide for a more legitimate representation of Croats in that state.

After the conclusion of the Bosnian war in the 1990s, the 1995 Dayton Agreement provided the political framework for the current governance of BH – a country split into two entities, the Serb-controlled Republic of Srpska and the Bosniak-Croat Federation of Bosnia and Herzegovina.

Dayton also recognised the three constitutive peoples – Serbs, Bosniaks and Croats – and set up a tripartite presidency system, in which each of the three groups would be represented by one member of the presidency.

However, with the voters in the Federation free to vote for either the Croat or the Bosniak member of the Presidency, the Bosniak majority could vote for their choice of the Croat member and in effect swamp out the Croatian electorate – which many Bosnian Croats believe happened in 2006 and in 2018, with the election of Željko Komšić as Croat representative.

In early March, all Croatian MEPs also urged for reforms in the BH electoral laws, with S&D MEP Tonino Picula stressing that the so-called “outvoting” of one of the three peoples is “a direct abuse of the system”.