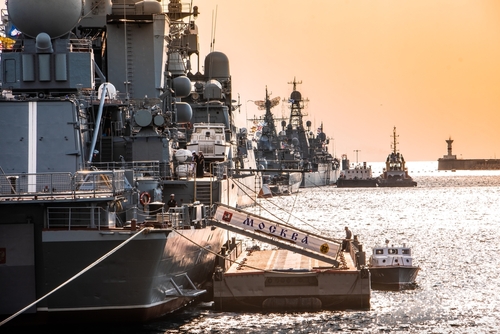 Belgium (Brussels Morning Newspaper) With the Russian Black Sea fleet blockading Ukrainian harbours, millions of tonnes of grain are stuck within silos in Ukraine, unable to reach the countries dependent on its food exports and threatening global food security. A possible solution could be for western countries to escort cargo ships travelling through the Black Sea.

Approximately 25 million tonnes of corn and wheat are currently sitting in siloses in Ukraine, around 98% of which would have been exported by shipping. A large number of countries, many in developing parts of the world, are dependent on these exports. Compounding the problem, Russia has introduced an embargo on exporting wheat, barley, rye and other grains.

According to the UN World Food Programme head David Beasley, the resulting food shortages could lead to millions of people dying around the world. “This is not just about Ukraine, this is about the poorest of the poor around the world who are on the brink of starvation as we speak,” Beasley told the UN Security Council.

While Russia has offered to secure a corridor for food shipping, it would be willing to do so only in return for the west lifting some of the sanctions imposed on Moscow – something which is not an option at this point, as the west does not want to incentivise Moscow into holding people’s lives hostage as means to lift the sanctions.

Exporting the grain through other routes is not as easy as it may seem – there aren’t nearly enough trucks to transport the food across the borders with the EU in time, and potential transport by rail is complicated by the fact that Ukraine and the EU use different rail gauges, necessitating lengthy and complicated cargo transfers.

An unlikely proposal came from Lithuanian Foreign Minister Gabrielius Landsbergis, who suggested the western countries could form a so-called “coalition of the willing”, joining in a naval mission intended to protect Ukrainian transport ships from being attacked by the Russian fleet, securing the export of Ukrainian grain across the Black Sea.

The Spanish El Pais daily reported on Saturday that the EU is considering launching such a mission, despite the serious risk of European ships clashing with Russian warships. A similar report was published by the Italian Il Messagero, which claimed that Italy would be willing to provide a frigate for such a mission.

The mission would not be unprecedented. United States and its allies used a similar strategy to escort oil tankers during the 1980s Tanker War, as Iran was threatening merchant vessels in the Persian Gulf and the Strait of Hormuz.

The shipping routes are located in international waters and Ukrainian waters, and the operation could be arranged as a strict humanitarian mission. Any interference by Russia would risk involving the countries not currently part of the conflict in Ukraine. However, even if the EU and western countries reach an agreement – almost certainly outside of the scope of NATO – the plan would still hinge on support from Turkey.

With the start of Russian invasion of Ukraine, Turkey invoked the 1936 Montreux Convention, barring the passage through the Bosphorus to all military vessels save for those with a home port in the Black Sea.

Turkey can open its straits to foreign warships, but the Convention limits its options – it would either have to be an active participant in the war, which is extremely unlikely, or it would have to declare itself as being in immediate danger. As one of the countries dependent on Ukrainian food exports, it could ostensibly claim this fact constitutes “immediate danger” to Turkish security.

According to Harry Nedelcu, Director of Policy at political consultancy Rasmussen Global, the convoy escort plan seems like a feasible idea for breaching the Black Sea Blockade. “When you look at the Black Sea and the ships that Russia has there, we’re talking about a few dozen ships, including submarines,” Nedelcu told DW. He added that another solution could simply be to provide Ukraine with more sophisticated anti-ship weapons.
However, according to former US ambassador to NATO, Ivo Daalder, missiles alone would not be able to lift the blockade. In an op-ed for Politico, Daalder notes convoy escorts do come with an increased risk of confrontation with Russian forces, but holds that the risks are worth taking in the face of the colossal humanitarian need.