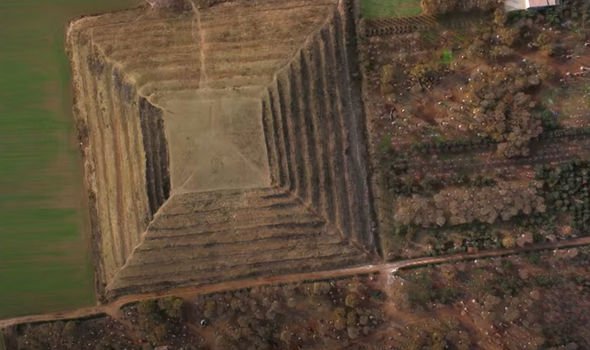 CHINA has an intriguing history, spanning back thousands of years, but a drone flying over part of the country’s farmland revealed evidence of an “astonishing world” rarely seen.

Outside the city of Xi’an, among the overgrown forests, rise scores of pyramid-shaped mounds that have been shrouded in mystery for thousands of years. The West first learnt about these colossal structures when Fred Meyer Schroder, an American trader, spotted them 100 years ago. He was travelling through the Shaanxi Province when he recorded a thorough description in his diary, noting he had seen one giant pyramid approximately 1,000 feet tall and nearly twice that size in length, surrounded by a number of smaller pyramids.

Fast-forward to the 21st century, and we now have a clearer understanding of what Mr Schroder was talking about, thanks to some incredible images snapped by a drone flying over the region, Timeline’s ‘Lost Pyramids of China’ revealed.

The series explained: “In the Shaanxi province a few kilometres outside the city of Xian, it’s just another day on another busy motorway in the world’s fastest-growing economy.

“Until the motorway suddenly becomes a runway – over the next 45 minutes, a team of experts steer a small drone aircraft over Shaanxi’s farmland and brings it back.

“It’s precious payload contains images of an astonishing world – a world of mega marvels – hundreds of Earth and mounds rising above the farmlands near Xi’an.

“Some are large, others gigantic.”

Western archaeologists have rarely been permitted to investigate the sites and some have claimed photos show shrubs have been deliberately planted to keep the secret under wraps.

But experts theorise there are almost certainly lost emperors and artefacts below the mounds that would dwarf Howard Carter’s 1922 discovery of Tutankhamun.

In 1974, the world got a peek of China’s truly extraordinary history when two farmers were digging just outside Xi’an and discovered the famous terracotta army of China’s First Emperor – Qin Shi Huang.

But Xi Jinping’s government say the technology does not exist yet to disturb the other pyramids without damaging its contents, citing King Tut’s discovery for reference.

Despite this, the series went on to speculate what they could be covering.

It added: “What’s buried inside them is mostly unknown, but who’s inside isn’t any mystery.

“These are the tombs of Emperors, generals, Lords and Ladies – some of the most powerful people who ever lived on Earth.

“2,000 years ago, these peaceful farmlands ran with blood as armies clashed and dynasties rose and fell.

“They echoed with the sounds of toil as thousands of workers built massive pyramid tombs, monuments of a splendid world even death couldn’t end.”

Architectural historian Tonia Eckfeld explained why these mounds were so important to the ancient Chinese.

“They said everything about how a person lived in their lifetime and said it for eternity.

But the series detailed how these grand monuments came at a deadly cost.

The narrator continued: “It’s a rare event when archaeologists open one of these mega-tombs giving experts like architectural historian Tonia Eckfeld a look inside.

“So many mysteries still lie beneath the Earth, but one thing is clear, centuries ago, building these tombs was a mega challenge.

“To satisfy their emperors, engineers had to move millions of tonnes of earth, dig huge holes dozens of metres deep and cover them with man-made mountains.

“Today, that earth is yielding a terrible secret, the tragic price of building these monuments to glory –  a price paid in blood.

“A price the Chinese people often refused to pay, for nearly 1,000 years, these massive engineering projects helped to create powerful dynasties – but they also helped destroy them.”