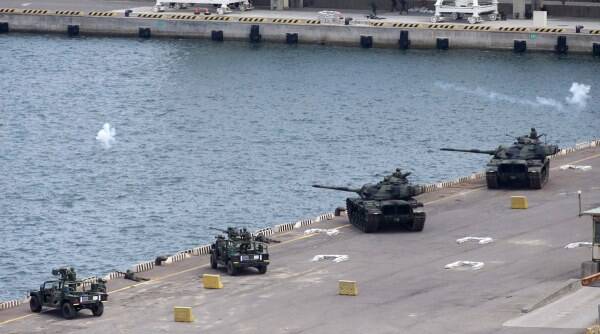 China announced earlier this week that the People’s Liberation Army (PLA) plans to conduct military drills in six zones around Taiwan, according to France24 reporting on Thursday.

Speaking during her visit on Wednesday, Pelosi stressed “our delegation came to Taiwan to make unequivocally clear that we will not abandon Taiwan.”

PLA, the military wing of the Chinese Communist Party (CCP), pointed out that it launched missiles as part of military exercises, with five of the missiles landing in Japan’s exclusive economic zone off Hateruma, according to Japanese authorities.

Nobuo Kishi, Japanese Minister of Defence, noted that Japan protested to China and stressed that the incidents presented “serious threat to Japan’s national security and the safety of the Japanese people.”

Beijing claims Taiwan as its own territory and has been isolating the island nation diplomatically as well as threatened to annex it by force if necessary. Taiwan rejects China’s claim, stressing that it is sovereign.

Tsai Ing-wen, President of Taiwan, criticised China for violating Taiwan’s sovereignty, calling on the CCP to be “reasonable and restrained.”

“We are calm and not impulsive, we are reasonable and not provocative,” she noted and concluded “but we will also be firm and not back down.”

Taiwan’s Ministry of Defence pointed out that 22 Chinese fighter jets crossed the median line of the Taiwan Strait, stressing that it is keeping a close eye on the situation and trying to avoid any escalation.

John Kirby, US National Security Council Coordinator for Strategic Communications, noted that the US is following the developments and called on the CCP not to overreact.

“There’s no reason to react the way that they have or to escalate the tensions,” he concluded.

António Guterres, UN Secretary-General, is concerned with developments and is keeping a close eye on the situation, according to a UN spokesperson.G7 foreign ministers previously warned Beijing against using the visit to Taiwan as an excuse for taking military action.